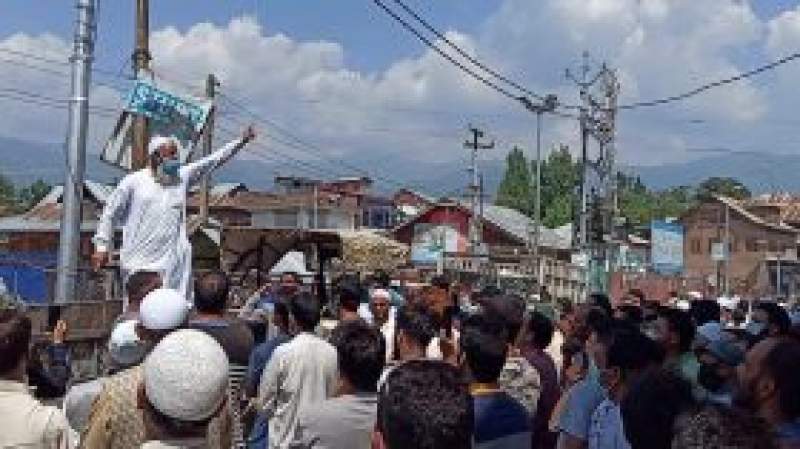 SRINAGAR, 20 August 2020:  Top Pakistani Kashmir leader, Syed Ali Geelani, along with Mirwaiz Umar Farooq, Grand Mufti of Kashmir Nasirul Islam has given call for complete shutdown in the Indian occupied Jammu and Kashmir territory and peaceful protests after Friday prayers in throughout Indian occupied territories.  Mutahida Majlis-e-Ulema has strongly condemned the blasphemous remarks and warned that such kind of derogatory acts would not be tolerated at any cost.

Syed Ali Geelani and Mirwaiz Umar Farooq asked the Kashmiri Muslims and Muslims throughout the world raise their voices against the blasphemous acts by BJP for killing of three lobourers from Rajouri in fake encounter and torture of two Muslim farmers in Reasi in the name of cow vigilante.

Meanwhile, All Parties Hurriyat Conference’s General Secretary, Molvi Bashir Ahmad in a statement issued Srinagar said that tens of thousands of Kashmiri Muslims were ready to sacrifice their lives to protect honour and dignity of the Prophet (Alhe Salam Sal Allah Ho Alhe Wasalam). He appealed for peaceful protests tomorrow after Friday prayers, against the blasphemous act by a BJP leader and hooliganism of cow vigilantes in Jammu region.

Other Kashmiri leadership in separate statements strongly condemned the blasphemous act and beating of two people by cow vigilantes and termed such acts as reflection of fascist and communal mindset of Indian leadership. They said that these forces were doing this under a well-planned strategy to hurt religious sentiments of Muslims in the occupied territory and provoke them to retaliate and then punish them, physically, financially and politically. The said that Indian secularism has been exposed.