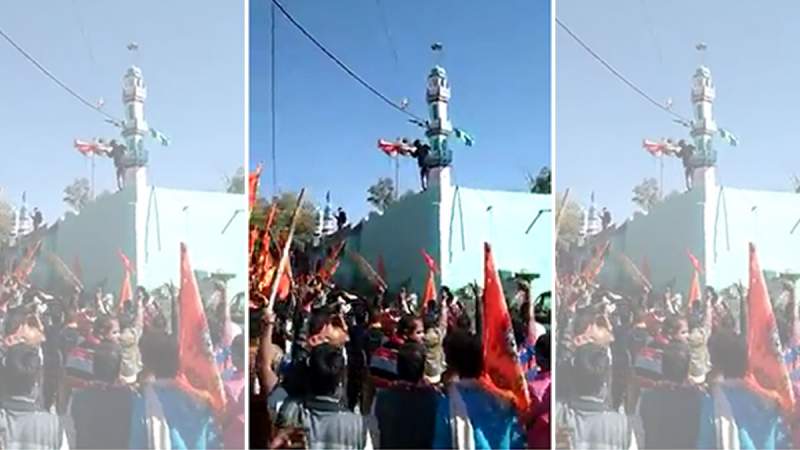 NEW DELHI, 31 December 2020, (TON): Five people were arrested in the Indian state of Madhya Pradesh on Wednesday for attempting to damage a mosque in Dorana village of district Mandsaur a day earlier, Indian media reported. Another incident of damaging a mosque by a mob reported in Indore, India.

According to media reports, the incident occurred when people from right-wing organisations took out a rally in the village to inform residents about a fund for the Ram Temple in Ayodhya — being built on the ruins of the Babri Mosque destroyed by a mob in 1992.

Videos shared on social media showed participating in the rally chanted Hanuman Chalisa outside the mosque while prayers were being offered inside. The situation turned violent when some of them – holding saffron flags and chanting “Jai Shri Ram” slogans – climbed atop the mosque and tried to damage the minaret. Videos of the incident showed the Hindu outfit members also trying to burn down a house and damaging several vehicles.

A police official told the media that some of the participants also damaged houses of Muslims in the area. No residents were injured because they fled into surrounding fields, he added.

More people aside from the five already arrested are being identified from the videos on social media. Those arrested have been charged under sections related to rioting, criminal intimidation and obscene acts, the official said.

Mandsaur Superintendent of Police Siddharth Chaudhary said the mosque was not damaged in the incident.

Another such incident reported in Indore on the same day. The people who had taken out the fund-raising rally tried to damage a mosque and recite Hanuman chalisa — a Hindu devotional hymn dedicated to Lord Hanuman, a popular Hindu god — outside it.

Police said it resulted in stone-pelting and gunshots which injured some people participating in the rally. Four first information reports (FIRs) were registered and 27 people were detained in connection with this incident, police added.

A delegation of five Congress MLAs headed by former minister Sajjan Singh Verma met Chief Secretary Iqbal Singh Bains and DGP Vivek Johri and demanded an impartial probe into the Ujjain clash. Congress MLA Arif Masood said: “If the Assembly session is cancelled because of Covid-19, how is it that permission is granted to carry out rallies. And if these people did not have permission, how is it that no action has been taken against them.”

Pakistan President Alvi responded in a tweet, ‘‘In India demolition of mosques is gaining face, seen the video of Andore below (Giving the links). Minority especially Muslims feel themselves separate and frightened. BJP/Modi fascist government is becoming a source for India to become a Hindu state.’’