After tractor, RJD leader Tejashwi Yadav rides bicycle to the Bihar Assembly in mark of protesting against the increasing fuel prices 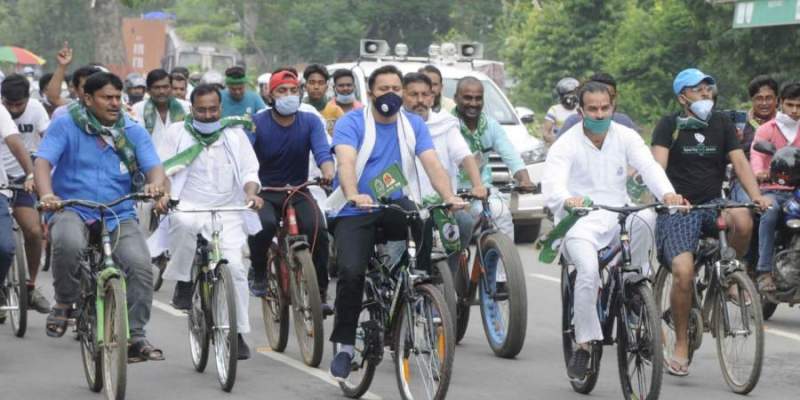 BIHAR, 26 February, 2021 (TON): In compliance with the protests against the continuous surge in the price of Petrol and Diesel Leader of Opposition Tejashwi Yadav was seen riding a bicycle from his home to the Bihar State assembly.

The opposition attacked Nitish Kumar-led NDA government over the increased prices of petroleum products across the country as the budget session of the Bihar State Assembly started on 18 February.

Tejashwi tweeted in Hindi, "In order to protest against the rising prices of oil, I rode the cycle to the assembly. The beloved government of the rich has looted the poor and left the common man to die by increasing the prices of petrol, diesel, and gas. The double-engine government is openly looting the poor and batting for the capitalists".

On 22 February, Tejashwi Yadav drove a tractor to reach the Bihar assembly, in an expression of solidarity with those opposing the farm laws and protest against rising prices of petrol, diesel, and cooking gas (LPG).

On 19 February, RJD MLA Akhtarul Islam Shaheen and Mukesh Raushan (from the Mahua constituency) reached the assembly on their bicycles.

The Indian country is under protests every now and then as the country is reaching closer to the elections.