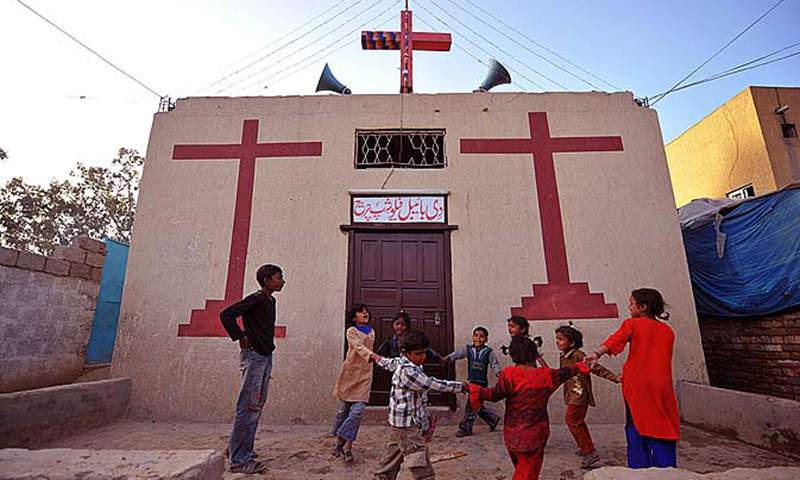 The constitution of Pakistan safeguards the citizens of Pakistan including the Muslims and the non-Muslims. Although based on the Islamic ideology but it ensures all the rights to the people from the minority groups. It is not wrong to say that the West is propagating much against Islam about the treatment of non-Muslims. It is claimed that non-Muslims are being discriminated on the basis of faith and religion. But if studied deeply the teachings of Islam about rights of minorities, this propaganda of West proves to be false.

Islam has forbidden all types of distinctions and discriminations based on race, color, nationality, language or caste. It brings people together purely on human grounds and at the same time grants them full freedom to practice the religion of their choice. When the first Islamic state established by the Prophet (PBUH) in Madina gave absolute religious freedom to all the minorities. He assured that minorities would get equal opportunities to live their lives happily. Non-Muslims were even allowed to merge into Madina according to their own will. They were given political rights and with respect to election of head of state they had equal right to vote.

After independence, Government of India Act, 1935, with certain adaptations, became the working constitution of Pakistan and the Constituent Assembly was given the task of framing future constitution for country by founder of the nation Quaid-e-Azam Muhammad Ali Jinnah. The first step towards it was taken in March 1949, when Objectives Resolution was passed. It was considered as foundation stone for the future constitution of the country. It also included guarantee of fundamental rights for all the citizens of Pakistan i.e. Muslims as well as non-Muslims.

The citizens were guaranteed their fundamental rights under following provisions: 1) wherein the principles of democracy, freedom, equality, tolerance and social justice as enunciated by Islam shall be fully observed. 2) Wherein adequate provisions shall be made for the minorities to freely profess and practice their religions and develop their cultures. 3) Wherein adequate provisions shall be made to safeguard the legitimate interests of minorities and depressed and backward classes.

A majority of the churches were constructed during the British era. All of these are in the same condition as they were many years before which mean they are duly protected by all the governments since 1947. Similarly, the educational institutions are given much importance and attention when the quality of education is concerned. In the same way all the Hindu holy places and temples are safeguarded and respected in Pakistan.

Nowhere in the constitution differences are seen, in article 25 (1), the constitution grants equality of rights based upon the supremacy of law. It means that minorities living in Pakistan are also provided equal protection of law and all are treated equally without any kind of discrimination. For example, on a petition filed by a French mother seeking custody of her daughter Amina, from her ex-husband Razzaq Tarrar, on Friday February 17, 2012 Lahore High Court granted custody of 11 years old girl Amina Tarrar to her non-Muslim mother pronouncing that a minor girl should live with her. Moreover, whosoever is the citizen of Pakistan has access to all types of public service without any discrimination. There is a special quota reserved for the non-Muslim citizens in the services of state. There are some prominent names serving in almost all the spheres, enumerating; former chief justice (2007) Rana Bhagwandas, film star Shabnam, model and actor Azekah Daniel, singer Nirmal Roy, “Sitara Jurat” Cecil Chaudhry, and currently a lot are striving to mark their names in the history of Pakistan like Major General (Retired) Noel Israel Khokhar an Ambassador to Ukraine, Brigadier Inam ul Haq serving Pak Army, and many more.

Article 9 and 10 are the most significant, the right to life and personal liberty providing the foundations of rule of law i.e. no one is to be arrested, detained or put under restraint except law authorizes. Pakistan Christian Post and many non-Muslim colonies all over the country and even in the big cities are the substantiation of the freedom of speech, expression, and association according to the article 19 and 19A.

Besides, article 23 and 24 states that no discrimination is shown to sale or purchase property from the non-Muslims. And no one can be deprived of his property without adequate compensation. Similarly, no one is discriminated on the basis of his culture. The Christians living in Punjab and Hindu community of Sindh have never been forced to leave their culture instead the Muslims and the non-Muslims respect each other‘s cultures and take part in each other’s festivals e.g. Christmas, Easter, Diwali, Holi etc.

When Pakistan came into being, the foes came up with much propaganda about the future of non-Muslims residing in Pakistan. But as it is said that tolerant cannot tolerate intolerance for the Muslims have bitter memories about the maltreatment they had gone through by the majority in the subcontinent. That is why the non-Muslims were given all the fundamental rights in the constitution and practical steps taken by the state and the society for the protection of these rights. With all the positive advances taken for the minority groups, few loopholes still need to be filled. After 73 years after independence generally the head of institutions cannot be a non-Muslim. Moreover, the reserved quota for the minorities is most of the times not given to the deserving ones rather the acquaintances of the high ranking. And albeit there are few instances that few societies do not accept the minorities because of the gap left between the two groups i.e. Muslims and non-Muslims. Even so, the non-Muslims in the country are able to live their lives freely and the guarantee of fundamental rights proved to be helpful for the progress of the country because the minorities are playing very vital roles as politicians, philosophers, lawyers, judges, bureaucrats, doctors, engineers, teachers and all are serving the sacred homeland.