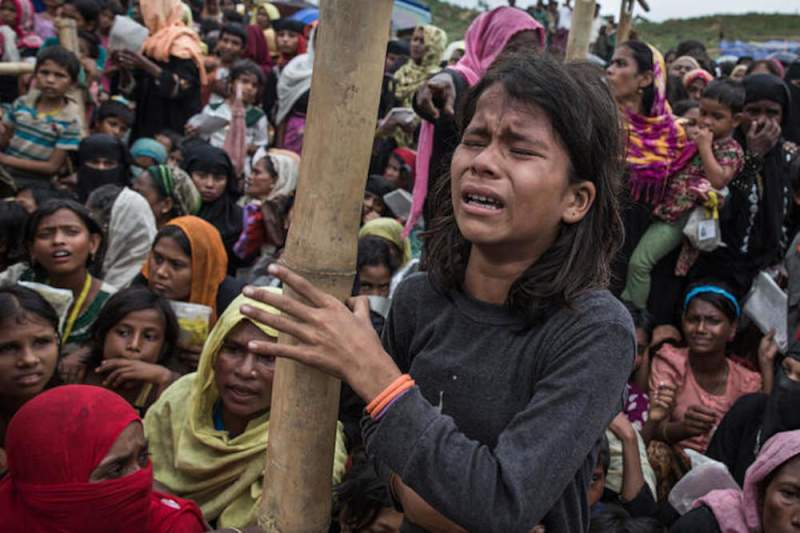 Sharing a border of approximately 271 kms, the Southeast Asian country Myanmar was one of the first countries to recognize Bangladesh as an independent nation after its creation in 1971. The diplomatic relations between the two remained amiable until President Thein Sein’s quasi-military government took the hold. However, despite, chances to strengthen the mutual ties in varied areas including trade and tourism, the relations between the two could not ripe due to one of the major crucial reasons; the Rohingya crisis.

According to the figures of European Commission latest report in 2021, Bangladesh hosts approximately 860,000 Rohingya refugees, the number may be more because the country would have more undocumented refugee coming from Myanmar because of the limited resources to host and accept more of the refugees. Besides India, Myanmar is a potential neighbor of Bangladesh in providing strategic advantages, such as in providing an alternative land route to China and South East Asia (Thailand, Malaysia, and Singapore) other than the sea and as it is a rich natural resource base, it can benefit in acquiring national security.

The issue of the Rohingya dates back when the military government in 1982 passed a Citizenship Act, recognizing only those ethnic groups that lived in the then Burma prior to 1824 as citizens; leaving the Rohingya group officially stateless. The Rohingya of the Rakhine state in Myanmar, faced poor living conditions, denied of the citizenship documents, education, employment, freedom of movement; marriage, vulnerable to arbitrary detention, forced labor, discriminatory taxation and confiscation of property started to flee Myanmar in 2017 and sought refuge largely in Bangladesh to avoid communal violence.

Due to the close geographical proximity of Myanmar to the states apart from Bangladesh; the Rohingya flee to Thailand, Malaysia and Indonesia where the Rohingyas have been escaping by boats. Thailand serves as a transit point where the refugees come to take a break and continue their way to Malaysia or Australia. According to the UN, nearly 100,000 Rohingya were in Malaysia in 2019. Malaysia too, does not offer legal status to the Rohingya. Besides, they have also sought refuge in Indonesia, although the number of refugees from Myanmar there remains relatively small because they are treated as illegal immigrants. Indonesia has rescued migrant boats off its shores and dispatched humanitarian aid and supplies to Bangladesh’s camps. In India, over 40,000 Rohingya refugees are living but official figures suggest that only 18,000 have registered with the UNHCR; though Indian officials estimate there are forty thousand Rohingya throughout the country.

Among Western countries, Canada and the U.S. do not hesitate to help the Rohingyas. By 2015, the U.S. accepted 70,000 Rohingyas and Canada was one of the first countries to resettle Rohingyas in 2007. Till now the international community has been stepping forward to facilitate the Rohingya in meeting the basic necessities of life.

So far, these long-term restrictions, in addition to the genocidal attacks in 2016 and 2017, continue to erode Rohingya mental health long after escape from Myanmar. The restrictions rose against the Rohingya both in Myanmar and Bangladesh are not merely innocuous difficulties that ought to be remedied in some distant future rather they are a violation of fundamental human rights and a source of long-term and ongoing mental harm for Rohingya refugees. But as the sky clears in the aftermath of atrocities, the Rohingya have continued to grapple with the tiger in the mind, the unseen mental and emotional impacts of violence. Just like the Rohingya women and children constituted crimes against humanity since they flee the country, the two has had been a subject of serious human rights violations including killings, rapes and forced displacements. The scale of distress is overwhelming. The Fortify Rights group report of 2020, describes serious symptoms of trauma, depression, and anxiety at more astounding rates; 62% of Rohingya refugees in Bangladesh experienced levels of trauma symptoms typically consistent with a diagnosis of post-traumatic stress disorder, while 84% experienced symptoms indicative of severe emotional distress, and 89% experienced symptom levels typically diagnostic of depression.

Conclusively, besides the need for the international community to step in, sub-regional and regional organizations need to play a more substantial role in maintaining security of the migrated Rohingya group and the remaining crises in Myanmar that the other way affects the Rohingya living in Myanmar. Despite the Rohingya crisis, Bangladesh needs Myanmar to achieve its strategic objective of extending connectivity to China and the ASEAN countries in establishing solid bilateral relations. Perhaps ASEAN can initiate constructive dialogue between the Bangladesh and Myanmar because this is the time when the two needs to enhance engagement and ways to promote bilateral trade and connectivity but that would first be initiated with building trust in the first place.