No help from junta as floods sweep southeastern Myanmar 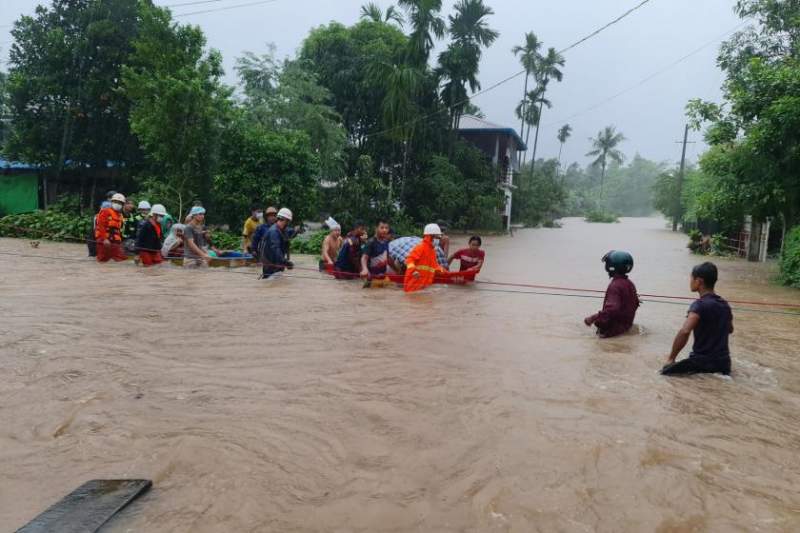 NAYPYITAW, 29 July 2021, (TON): Local charities said that Junta-controlled authorities have offered no help as floods have inundated homes in southeastern Myanmar, leaving at least hundreds without shelter in the Mon State capital of Mawlamyine and the border town of Myawaddy.

Rescue efforts have been self-organised and supported by volunteers, they said, while authorities have failed to set up flood relief camps or provide food aid to those affected.

Residents in the Mawlamyine neighbourhoods of Zayar Thiri, Zayar Myaing, Thaya Aye and Hlaing were evacuated after the Salween river burst its banks on Monday, the leader of a charity group in the city told media.

There is no relief camp right now, said a representative from another Mawlamyine charity. We delivered steamed rice, eggs and Ma Ma instant noodles to those who could still live upstairs. We donated food along with individual donors.

The representative said “according to our list, the dead are of various ages.”

Five neighbourhoods in Myawaddy near the Thai border, and three in Kyainseikgyi in Kayin State, were also inundated and residents have been evacuated by local charity groups, according to a resident and a volunteer.

A Myawaddy resident said “there are about 1,000 flood victims. The military has not provided assistance yet. Only free funeral service groups came, and they rescued every victim.”