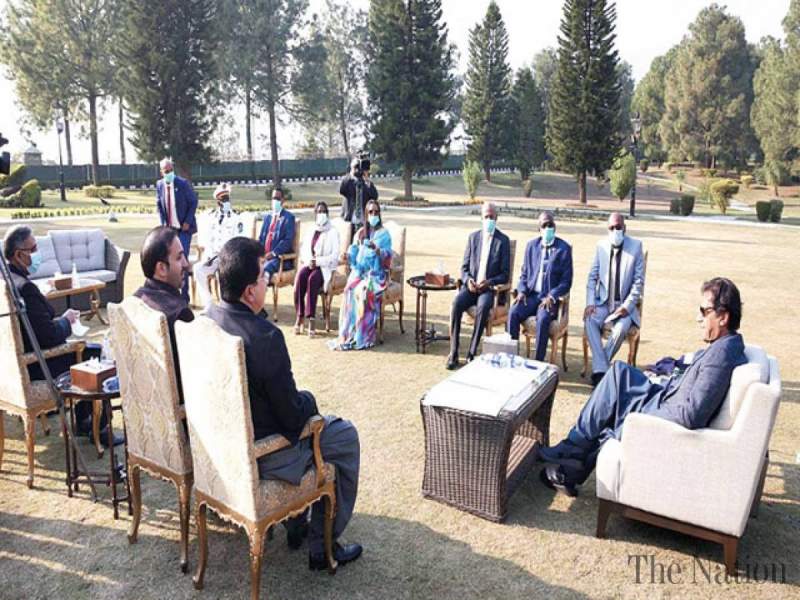 ISLAMABAD, 31 December 2020, (TON): Stressing the need for lasting peace in Afghanistan, PM Imran Khan on Wednesday called for foiling and exposing Indian propaganda and its Nefarious designs to the international community.

“There is no military solution to the conflict in Afghanistan; it should be resolved through negotiated political settlement,” the prime minister said during a meeting with Afghan Minister for Industry and Commerce Nisar Ahmed Faizi Ghoryani, who called on him at the Prime Minister House.

Mr Khan stressed the need for all sides in Afghanistan to take steps to reduce violence, leading to ceasefire. Highlighting the close fraternal ties between the two countries, the prime minister reiterated Pakistan’s consistent support to peace and stability in Afghanistan.

“Peace in Afghanistan would be beneficial for the entire region by enhancing regional connectivity and providing new opportunities for economic cooperation,” he said.

Talking about bilateral trade between the two countries, the prime minister said Pakistan and Afghanistan had untapped economic synergies and complementarities, which could be best realised through cooperation in the economic and trade spheres.

He mentioned the Mazar-i-Sharif-Kabul-Peshawar trans-Afghan railway line project, and reiterated Pakistan’s support to Uzbekistan’s efforts to secure financing for the project.

The Afghan commerce minister conveyed the greetings of President Ashraf Ghani and highlighted the progress made on matters related to transit and bilateral trade.

He said the Afghan president appreciated the positive role played by Pakistan in facilitating the Afghan peace process, and affirmed his country’s desire to enhance trade and economic ties with its neighbour.

Adviser to the Prime Minister on Commerce and Investment Abdul Razak Dawood also attended the meeting.

The Afghan delegation is on a five-day visit to Pakistan (Dec 27 to 31) for the 8th meeting of Afghanistan-Pakistan Transit Trade Coordination Authority (APTTCA).

In a separate meeting, Prime Minister Khan said the baseless and concocted Indian campaign should be countered with facts and the real face of India should be exposed before the international community and public.

He said Indian media was trying to divert the world’s attention from New Delhi’s actions in the Illegally Indian Occupied Jammu and Kashmir (IIOJK), grave human rights violations and threats to regional peace by implementing Hindu fascist agenda and through negative and baseless propaganda against Pakistan.