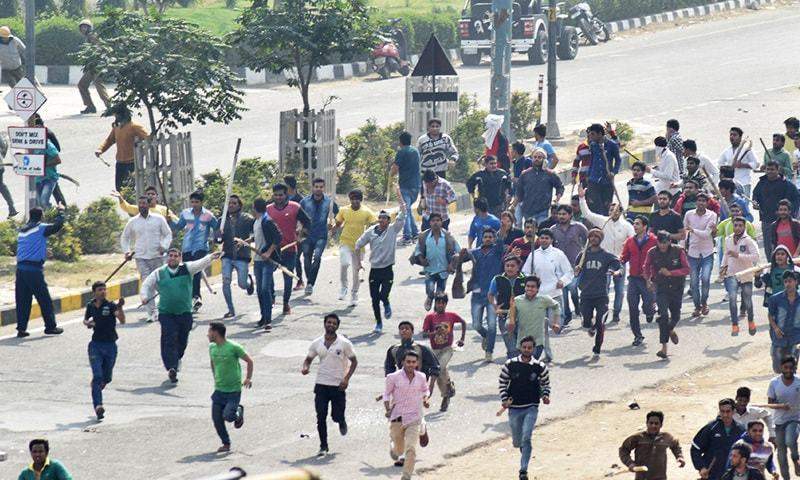 India claims to be a secular country but its Muslim minority is awfully marginalized population. For decades, Muslim communities have faced discrimination in India and encountered barriers to achieving livelihood. India is home to hundred million of Muslims and has one of the world’s largest Muslim populations but a minority that make up 14 to 16% of population in the predominately Hindu country have faced extreme sectarian violence. Soon after independence Muslims started becoming victims of Violence. Regular clashes appear in the historical record.

On Tuesday, 29th December, 2020 Hindutva mob pelted stones on Muslim locality near Indore. The incident took place in Muslim-dominated village Chandankhedi in Indore district when the rally of around 200 people was taken out from right-wing organizations to collect donations for the construction of Ram temple in Ayodhya. Ram Temple in Ayodhya was built on the ruins of the Babri Mosque demolished by riotous Hindu nationalists in 1992. However, Babri mosque verdict by Supreme Court of India ripped up the veneer of so-called secularism of India. Another incident of damaging a mosque by a mob reported a day earlier at Dorana village of district Mandsaur.

Provocative activities of the Hindus against Muslims are old maneuvers. Hindutva rally stopped in front of a mosque and started chanting provocative slogans “Hanuman Chalisa” and"Jai Shree Ram, (Long live Lord Ram)"outside the mosque when prayers were being offered inside. Some members from the rally climbed atop the mosque, hoisted saffron flags and damage the minaret. In footage that has since emerged shows the mob climbing up the minaret and dome, attempting to pull down a section of the minaret and some videos also showed Hindutva mobs rampage trying to damage nearby houses and vehicles. The provocative activities of the Hindutva rally tried to trigger the villagers. The rallying people started stone-pelting on the villagers and Mosque. According to police four first information reports (FIRs) were registered and 27 people were detained in connection with this incident.

Similar incident was reported in Ujjain’s Begum Bagh area three days earlier. During the rally by Bharatiya Janata Yuva Morcha, similar slogans were chanted and stone pelting incidents were reported. There are so many such examples of violence against Muslims since the Partition of India in 1947. Such violent attacks on Muslims by Hindu nationalist mobs have been frequent. In recent decades, Hindu nationalism has been a growing political force, on all accounts recreating India’s secular nature and leading to new assaults on the country’s religious freedoms.

Prime Minister Narendra Modi since elected to power in 2014 has explicitly pursued Hindu nationalist agenda and ignored Muslims and other minorities. What happened in Ayodhya in 1992 was also Hindu pride which is the key element of Modi's vision for India. Although Modi regime constantly proclaim his aim is to develop India for all Indians but Muslims are hardly represented in BJP governments in the Centre and the states. Muslims of India are continuously struggling for respect and acceptance, there struggle is now reduced to mere survival as a Muslim after BJP regime. Despite of the constitutional protections Muslims have faced systematic discrimination, prejudice, and violence. Minorities, especially Muslims of India are isolated and intimidated. No minority group in India is save today.

Muslim community is such excluded section of Indian social and political structure due to their religion that they are being labelled as 'anti-national'. Muslims don’t feel secure and are apprehensive in today’s India. In truth, India has a long history of marginalizing Muslims. After Modi’s BJ came to power in 2014, hate crimes against Muslims have increased. Religious-based hate crimes were about 30% in the 2014 to 2017 period, and then doubled since Modis victory again in elections 2019. However, it wouldn’t be wrong in saying that BJP regimes policies give the impression of consolidating Hindus against Muslims to keep the communal caldron simmering.

Discrimination with Muslims exists at another levels in the country. Widespread use of Hindu mythologies, symbols, slogans and continuing controversy over the foremost educational institution of Muslims and Mosques have indeed done much to provoke Muslim fears. Indian institutions have fallen in a spiral of silence. Administrative machinery and police have sided each time with violent Hindus during riots, which have further deepened widespread feelings of discrimination. However, Large-scale outbreaks of violence have rarely erupted in recent years on any other minority group in India but the random discriminatory attacks on Muslims have occurred frequently. Undoubtedly, Hindu mob attacks on Muslims have become “new normal” in India.

Irony is that the Indian minorities Muslims, Christians, Agnostics and Atheists living in India have to face communal violence very frequently. Minorities are treated and rewarded unfairly. There place of worships are not even save. An award winning Indian novelist Arundhati Roy says, “The situation in India is approaching genocidal”. What is playing out in India is not a simple religious conflict between Hindus and minorities but a political struggle between two visions who see it as an open, secular nation and those who wish to create India as a Hindu state. The policies of the Indian state are nor just unsecular but smack of blatant religious reverse-discrimination against its minority groups.