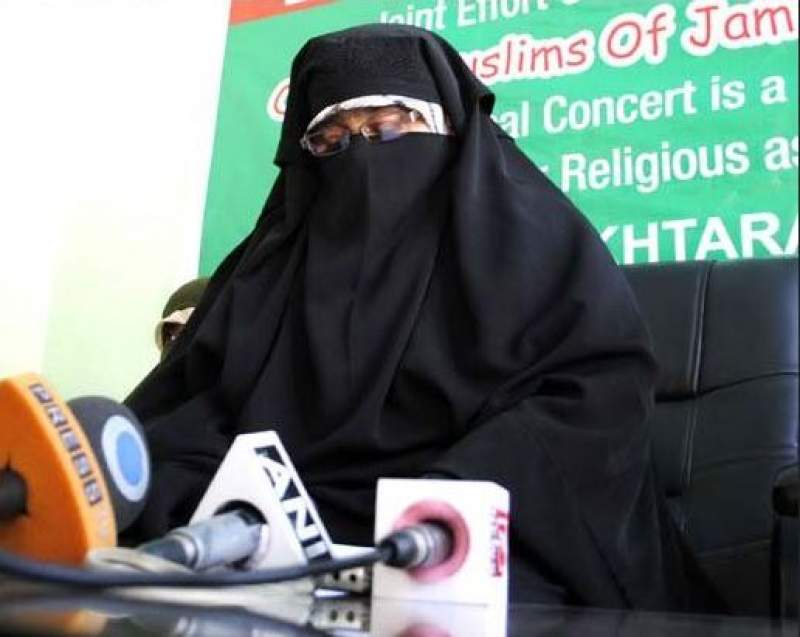 The Dukhatr e Kashmir Asiya Andrabi and the founding leader of Dukhtaran-e-Millat (Daughters of Nation) remains the most popular leader of Kashmir’s freedom struggle. She is renowned for the women mobilizing in Jammu and Kashmir fought against the illegal occupation of the Indian forces.

Since her inception of struggle she faces jailed and house arrest. Asiya Andrabi and her two associates jailed by the court, allegedly work against the forceful occupation of Indian army in Jammu and Kashmir. She commenced the pro-Islamic and Pro-Pakistan ideology in the region that the people of valley struggling for the annexation of Kashmir with Pakistan. Her motives in her single statement is following

“We have sacrificed 80,000 martyrs and we are ready to sacrifice more”

The diversity of her life explains her struggle in the different walks of the life. She openly announced the social work and welfare of the women’s as well.  In 2006 the Dukhtaran-e-Millat claimed to have 500 active members in Kashmir. The political movement of Asyisa Indarabi proliferate the empowerment of valley women’s in the struggle of freedom.

After the death of Burhan wani men and women’s took streets and protest against the Killing of Burhan Wani. The protest and rallies highly leaded by Asyia Andrabi, over the six months women participated in the protest in the leadership of Asyia Andrabi.  She also stood against the Sexual Violence and impunity in the state of Jammu and Kashmir.

In 2018 she condemned and demonstrates the protest against the rape and killing of eight year old child in the Kathua district. The colleges female students raise the voice against the aggression in the result security forces of India imprisoned Asyia Indrabi in Anantnag. She dedicated her life for the cause of her land and her people which are facing detentions bear the funerals on the shoulders of Kashmiris and rape of the women’s.

On the Srinagar day vocal voice of the struggle of the Jammu and Kashmir categorical shows his love and affection with Muslims of Pakistan. She stated that

“We have gathered here, despite challenging times, to express our unity with our holy land (Pakistan) and convey to the world that Kashmiri Muslims want to live and die with the Muslims of Pakistan” and during her statement she waving the flag of Pakistan.

Meanwhile, Indian police register a case  Asyia Indrabi on chanting the slogans of Pakistan. As geography shows that Kashmir is the natural part of the Pakistan and the two nation theory which is highly supported by the Asyia Indrabi.

“My children saw father only behind the bars,” Asiya narrates.

After the tiring struggle, Asyia Indrabi have still hope and firm believe that one day Jammu and Kashmir will became the part of Pakistan and kick back the invaders and forceful forces. In her several speeches she mentioned that they can kill us but not our aspirations of the freedom because history already witnessed, ideology can only replace by another ideology not by the killing of people.

Her effort for the women empowerment in the valley is remarkable. Women’s are the equal part of the struggle in Jammu and Kashmir. She always motivated for the Islamic values and traditions regarding women within the framework of Islamic laws. For the efforts and endless struggle of freedom and illegal occupation of Indian forces in Jammu and Kashmir which resulted, imprisonment and hindrances in her life.

In recent developments, Delhi court ordered framing of charges against Asiya Andrabi and her two associates. The case relates to support of Pakistan and raise the vocal voice against the Indian forces. Special Judge Parveen Singh ordered putting Andrabi and her associates on trial for various offences punishable under IPC and stringent Unlawful Activities (Prevention) Act (UAPA).