Genocide of Kashmiris – A slave-nation in post-modern era 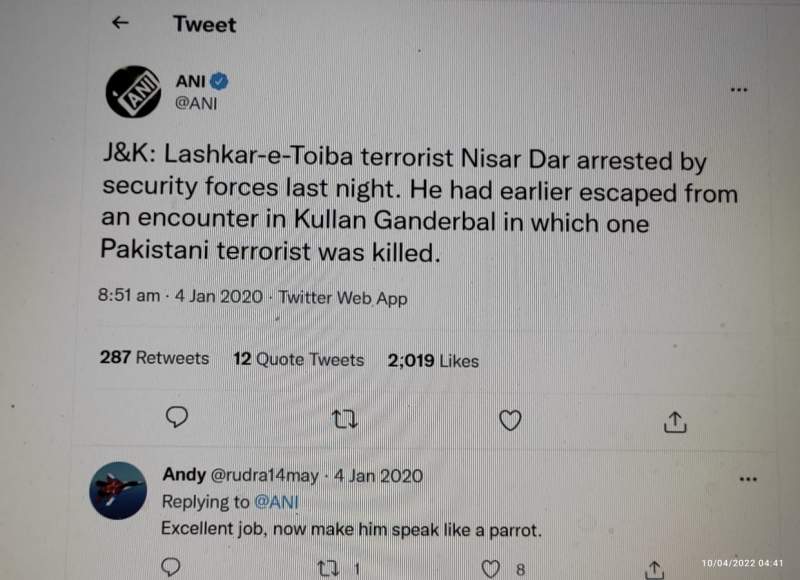 There is an ongoing genocide of indigenous inhabitants in UN recognized dispute Jammu and Kashmir State. Does it matter to anyone? India has established a reign of terror and anyone who demand implementation of UNSC resolutions on Kashmiris' right of self determination are killed in Indian military operations. This year alone hundreds of Kashmiris are missing whose whereabouts are not known. India is bent upon converting this disputed State on model of Dubai and settle thousands of non-state subjects to create a balance between aliens settlers and indigenous inhabitants of Kashmir. India introduced amendment in Unlawful Activities (Prevention) Act (UAPA)1967, which allowed agencies to designate individuals as terrorists and seize their property. Earlier, only organizations could be designated as ‘terrorist organisations’. The UAPA allows detention without trial for six months and turns the burden of proof on the accused. In guise of the new law genocide of Kashmiris is taking place and their properties confiscated and given to others who are ready to invest in the disputed state.

It is on record that Jammu and Kashmir Inspector General of Police (IGP) Vijay Kumar, in an official statement on 9 April 2022, said, “45 terrorists have been killed in Jammu and Kashmir since January this year”. An Indian Junior Commissioned Officer (JCO) serving at 3 Rashtriya Rifles, who claimed to be involved in the operations in Kashmir said, “The 9th April figures of killings between 1 January and 31 March 2022 by IGP are the official figures, whereas, as per Brigade level briefing at Command Headquarters, 189 Kashmiris have been killed and 1760 youth have been arrested in the Area of Responsibility of Northern Command for their involvement in anti-India activities. We kill normally 2/3 Kashmiris each day in operations and bury silently them under the new rules”.

In the recent development, official statements emerging from different Indian authorities including Indian Army, Central Reserve Police Force (CRPF), Police and Indian Ministry of Home Affairs confirmed that on the basis of input furnished by Indian Military Intelligence (MI) personnel about presence of terrorists in Sirhama village of Sri Gufwara in the Anantnag district, a joint team of the Indian Army, CRPF and J&K Police launched a search and cordon operation on Saturday, 9 April 2022. Later, it was claimed that a hard core Kashmiri terrorist was killed in an encounter identified as Lashkar-e-Tayyiba (LeT) commander Nisar Ahmed Dar while two Indian security forces personnel were injured in the operation. Three days back, two other terrorists, identified as Safat Muzaffar Sofi and Umar Teli were killed in an encounter with Indian security forces in Tral area of Pulwama district.

The question arises whether those Kashmiris killed were terrorists or innocent civilians? We will cover the encounter of 9 April 2022 that killed Kashmiri terrorist as a test case and request international community to carryout probe themselves. There is hardly any Indian electronic media, print media or social media websites which did not cover the 9th April 2022’s encounter in Anantnag in which a hardcore terrorist was killed after a fierce gun battle. Every entity claimed that Indian Army and the security forces have killed a hard core terrorist Kashmiri belonging to LeT in an encounter in Sirhama village. Some of the media that covered the incident include Zee News, NDTV. Times Now, The Hindu, Economic Times, Business Standard, Outlook India, Times of India, ANI News, PTI, India Today, The Print, Deccan Herald, Republican World, Daily Excelsior, Mid Day, First Post South Asia Terrorism Portal etc.

Interestingly, on 4 January 2020, information was leaked to Indian media and Indian news agency ANI tweeted that Security forces on Friday late night arrested Nisar Ahmad Dar, a most wanted terrorist from Srinagar along with cache of arms and ammunition recovered from his possession. If we critically examine ANI’s tweet two years back at 08:59 am on 4 January 2020, “J&K: Lashkar-e-Toiba terrorist Nisar Dar arrested by security forces last night. He had earlier escaped from an encounter in Kullan Ganderbal in which one Pakistani terrorist was killed”. One wonder how it is possible that a terrorist who was arrested two years back in January 2020 was killed in a joint operation by Indian Army and Security Forces on 9 April 2022. Surprisingly, one Indian media outlet reported, “Police officials said that LeT commander Nisar Ahmad Dar resident of Redwani Bala Kulgam has been killed in Sirhama. It further said that he was involved in several crimes and killings in the area. He was active since 6th May 2021.” How it is possible that when Nisar Ahmad Dar was arrested on 4 January 2020 but he become active from 6 May 2021.

There hundreds and thousands of Kashmiris who have been killed like this and buried without handing over the bodies to their families. How long Indian occupying forces should be allowed to carryout genocide of Kashmiris. Where the United Nations Organization has so far failed in implement its own resolutions in the disputed region of Jammu and Kashmir state, what can be expected from other Human Right Organizations. Mere statement by these organizations would not suffice. UNO has deployed UNMOGIP but when the mission does not have a mandate beyond the Line of Control (LoC), one fails to understand purpose of existence of UNMOGIP, which has 44 Military Observers, 25 International non-military personnel and 47 local non-military staff. It is high time that all the world leaders, especially the UNO should stand and support oppressed Kashmiris of Indian held Jammu and Kashmir. There is no doubt that Jammu and Kashmir is witnessing a renewed stage of freedom struggle to make the world realize that Jammu and Kashmir is not an internal matter of India