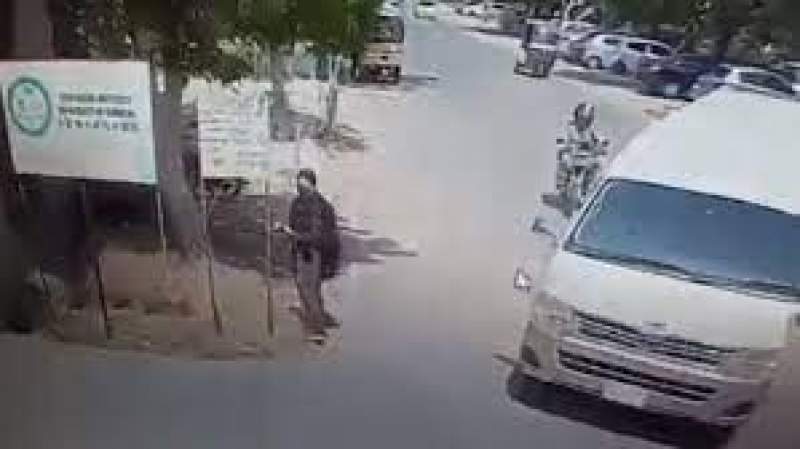 As per the initial investigation a transgender was seen exhibiting his suspicious acts in front of Close Circuit Television Camera. It was confirmed from his body structure, arms, limbs, the way he was standing with gap between his feet that he was not a female. Interestingly, this transgender despite standing close to the ill-fated van was not killed. A security personnel claimed that the video was engineered to link transgender in female dress with suicide attack. He ruled out any suicide attack and claimed that remote control was used to explode the middle portion of the van.

Karachi Police Chief Ghulam Nabi Memon said an initial investigation showed a suicide bomber was behind the attack. He said that closed circuit television footage from the site showed a person dressed in the female burqa head-to-toe covering walking up to the van, followed by an instantaneous explosion.

The aggrieved and separatist Baloch elements in Balochistan province as well as abroad have rejected any of their involvement in 26 April attack on Chinese. They ensured that they are the most loyal citizens of Pakistan but aggrieved our injustices. However, international and local media have blamed Baloch Liberation Army (BLA) for the attack and claimed that BLA has accepted responsibility of the attack on vehicle carrying the Chinese, using female suicide bomber. A local Baloch commented that it is an excuse to launch military operation on Baloch citizens to handover their properties to outside investors.

Pakistan Foreign Office in a statement said, “We strongly condemn the reprehensible terrorist attack in Karachi which claimed innocent lives, including those of Chinese nationals working at the Confucius Institute. The Government and people of Pakistan extend their deepest condolences and sympathies to the families of victims who lost their lives in the incident." It added that the law enforcement agencies are investigating the incident to apprehend the culprits and bring them to justice.

The Chinese Ambassador in a statement said, “The Embassy and Consulates General of China in Pakistan express deep condolences to the victims from both countries and sincere sympathy to the injured and the bereaved families, and will make every effort to handle the incident with the Pakistani side,”

In a statement, Pakistani Prime Minister Shahbaz Sharif tweeted, “I am deeply grieved on the loss of precious lives including of our Chinese friends in the heinous attack in Karachi today. My heartfelt condolences go to the bereaved families. I strongly condemn this cowardly act of terrorism. The perpetrators will surely be brought to justice,

Former Prime Minister Imran Ahmed Khan Niazi tweeted, "Strongly condemn the blasts in Karachi which claimed yet more innocent lives. We must unite to reject the agendas of hate & violence." The media issued self engineered statement on the behalf of Imran Khan. “Strongly condemn the terrorist attack targeting Chinese teachers of Karachi University. This is yet another attack with a specific agenda of trying to undermine Pak-China strategic r’ship. We must ensure defeat of this foreign-backed agenda of our enemie.”

If we recall, within minutes of being declared Pakistan’s new Prime Minister, Shahbaz Sharif made clear his intention to breathe new life into the estimated US$60 billion China-Pakistan Economic Corridor (CPEC). The Chinese Foreign Ministry spokesman, Zhao Lijian, announced in a statement, “We noted Prime Minister Shahbaz Sharif’s remarks on the CPEC and we highly commend them.” If we recall, in the near past, Chinese-funded programme slowed to a level that most of ongoing construction projects fell far behind schedule, while there was no new major projects launched. The concentration, however remained on Chinese-funded programme slowed to the point that most under-construction projects fell far behind schedule, while no new major projects were launched. Previously, Abdul Razak Dawood, PM Advisor concentrated only on investment under the second phase of CPEC. The B2B Investment to include private sector and academia in the sectors of information technology, agriculture, transport and urban development under public-private partnership, automobiles, pharmaceuticals and special economic zones. Now there is hope to start earlier projects.

There is no doubt, the the transgender behind 26 April University of Karachi attack has direct links with India. The self engineered video need to be investigated and this person in the guise of female suicide bomber who remained unhurt as no dead body was found outside the van. Through video the culprit can be easily identified and whole network of stakeholders to derail CPEC and Indian connection can be unearthed. It was shocking to lose precious Chinese and Pakistani lives but it is likely to strengthen Pakistani - Chinese relation rather than further delay in already pending and slow down CPEC projects.