Inside the burning of Hindu Temple in Pakistan 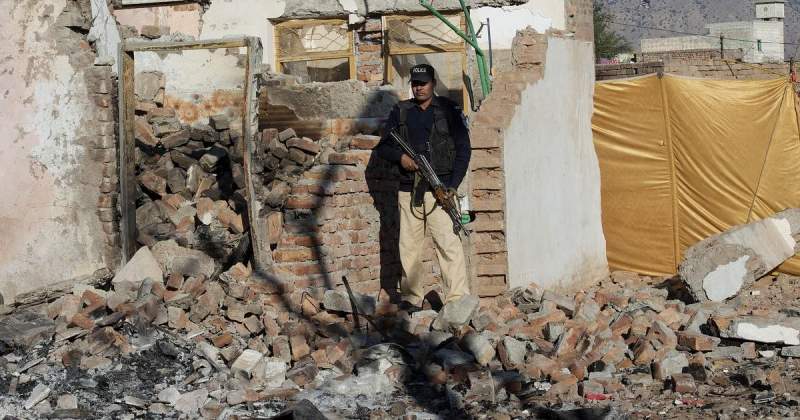 KARAK, 1 January 2021 (TON): Burning and demolition of structure near the claimed Hindu temple in Pakistan’s Teri village of Karak district in Khyber Pakhtunkhawa province is being investigated by the authorities. The Chief Justice of Pakistan took cognisance of the issue and has fixed the matter before court on 5 January 2021, with directions to one-man Commission on Minorities Rights, KP chief secretary and KP Inspector General of Police to visit the site and submit report on 4 January 2021. Khyber Pakhtunkhwa Inspector General of Police (IGP) Sanaullah Abbasi visited Terri site yesterday and started the investigations.

As per the old record, a Hindu contractor namely Mr. Paramhans working with the British in NWFP spent some time in the house in the past and after partition and independence in 1947, it was declared as Evacuee property. Later in 1950, it was occupied as residence by a refugee from India claiming that his caste was Mufti. During Musharaf regime some unidentified persons in authority negotiated with the occupant of the house on the pretext that it was a Hindu Samadhi (shrine). The occupant of the house initially claimed that he was from the Hindu family of Mr. Paramhans and had embraced Islam after partition in 1947. He also claimed that Mr. Paramhans use to pray inside his house, thus is a Hindu Mandir. Later Hindu elders from Sindh also intervened and tried to negotiate by making a payment of Rs 375,000 as cost of the land but the refugee Mufti did not vacate the property and claimed that 5-marla house (approximately 1125 square feet) worth is around Rs 5 million.

As per the recorded statement of Dr Ramesh Kumar Vankwani, a member of the National Assembly from Tharparkar and patron of the Pakistan Hindu Council, he had invited the attention of the apex court to the frequent incidents of desecration of Hindu temples in the country, especially occupation of Paramhans Ji Maharaj’s Samadhi in Teri village of Karak district by an influential mufti. Dr Vankwani said he had met the provincial Chief Secretary, the Inspector General of Police and the local Commissioner, but he had been informed that the Hindu notable in whose name the temple was built had converted to Islam. A letter written by the-then Deputy Commissioner of Karak to a Deputy Secretary of the provincial Home Department in February 2014, in which it was highlighted that it was residence of Paramhans Ji Maharaj where he died in 1919 and buried in Teri village and house was converted into a Hindu shrine. The provincial government took up the case with Supreme Court for an order. The Chief Justice Supreme Court of Pakistan passed judgment dated 19 June 2014.

In the recent incident, locals of the Terri area were instigated that some people have purchased additional property around the house claimed to be Paramhans Ji Maharaj’s Samadhi and have also silently completed some of the construction work of new structures in extended area to reflect their permanence. They were convinced to honour the June 2014 verdict of the Supreme Court regarding Hindu temple, wholeheartedly but local Hindu community had given a contract for the expansion of the shrine to a local contractor which was not acceptable to the people. Rumours were spread everywhere that some influential people wanted to turn this small house of 5- Marla into a large complex for Hindus on the lines of Kartarpur Complex of Sikhs.

Accordingly, residents of Teri, Karak approached Civil Administration and Police for a protest rally, on an assurance that it would be a peaceful one.  The protesters, few hundred of residents led by Malauna Sharif who reached the site of illegal construction saw some planks of wood near the construction already set ablaze. Witnesses also said unidentified miscreant had already done that and when protester reached the site of structure it was already set ablaze. Social media released images of young clean-shaven boys, covered with masks; demolishing additional structure made adjacent claimed Hindu Samadhi.

Reacting to an incident of demolition of Terri Hindu temple, Pakistan Muslim League-Nawaz’s Hindu Member National Assembly Kheal Das Kohistani said that historical Hindu temple was destroyed by miscreants in presence of Police and Civil Administration of Karak. Patron-in-chief of Pakistan Hindu Council Ramesh Kumar Vankwani tweeted and called a protest demonstration on 31 December and claimed that Terri temple was demolished by mob led by Malauna Sharif and demanded arrest Maulana Sharif and all culprits under the Blasphemy laws (295C).

District Police Officer Irfanullah confirmed registering of First Information Report (FIR) against two local clerics identified as Maulvi Mohammad Sharif and Maulana Faizullah and several other unidentified persons. Police in Pakistan has till now arrested 41 people and is continuously carrying out raids to arrest more. Police said 350 people have been booked in the FIR and they arrested Rehmat Salam Khattak, a leader of Maulana Fazlur Rehman-headed JUI-F from his house in Chokara, Takht-i-Nusrati Tehsil as reportedly he participated in a meeting before the attack on the Hindu shrine.

Khyber Pakhtunkhwa Inspector General of Police (IGP) Sanaullah Abbasi visited Teri to inspect the destroyed structures along with DIG Kohat Region Tayyab Hafeez Cheema and Kohat Division Commissioner Syed Jabbar Shah. IGP Sanaullah Abbasi said the police would ensure security to the places of worship of the minorities and protect their rights as enshrined in the Constitution. He assured that a total of 350 persons had been nominated in the FIR and all will be arrested soon. If we recall, on 10 Moharram in 2013, orthodox Muslims Mosque and Madrassa namely Madressah Taleemul Quran was burnt to ashes in which 200 students were burnt alive but despite clear identification of terrorists in several videos, none was punished rather media including top Pakistani newspaper projected the burnt Mosque as epicenter of the violence. One wonders if Supreme Court of Pakistan would be shared with correct historic record and decision would be possible purely on merit.