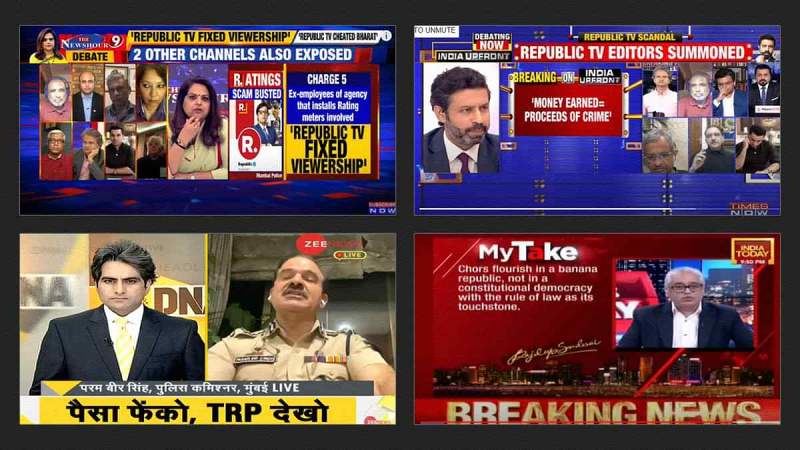 Media is one of the strong pillars of the state. The main responsibility of media is to raise the voice for voiceless. But here in India, things are different. Media are not fulfilling their core responsibilities. Instead, they are rather busy in misleading the public. There are different Tv channels who are involved in this blame game. Here we are talking about a few. Four prominent news channels of India named Zee News, Aaj Tak, India Tv and News India, you might have noticed that they are always at the top in TRP. They broadcast prime time shows where they intend to discuss issues every evening.

The debates on Zee News are called “Taal Thok Ke”. According to a survey on different debates Out of the 50 debates on Zee News, they attacked Pakistan in 12 of them. They criticised the opposition in 19 of them, praised Government in 13, raised the Ram Mandir issue in 4. They raised the PMC bank issue in 1 debate and talked about Bihar floods in only one debate. You will notice that out of 50 debates, they have talked about the matters of importance in only two times.

Going ahead, India TV news debates are called “Kurukshetra”. Out of the 53 debates, they have attacked Pakistan in 30 of them, attacked opposition in 11. Praised government in 11 and talked about the Chandrayaan mission in 1 time. So, out of 53 debates, major issue was raised in only 1.

The debate on News 18 is conducted by Amish Devgan. You would see the same story in these debates too. Attacks on Pakistan in 18, attacks on the opposition in 25, praising government in 7, and Ram mandir in 5 debates. Amish Devgan didn’t even raise a single issue of importance. The debates in Aaj Tak are hosted by Rohit Sardana, the story remains the same there too.

In general, the same story prevails in all these top news channels. They are more interested in neighbour Pakistan as compared to what’s happening in India. There were a lot more issues than these. There were core issues that were of actual importance. Hunger index was released that displayed the amount of malnutrition in India. Economic crisis surfaced, an unemployment report also surfaced, that stated In Haryana unemployment rate is highest as compared to the rest of the states in India. There were elections too in Haryana at that time. But did the news channels raise this issue?? No, they didn’t.

The job of the media is to give a voice to the public, to raise a voice for the public and help it reach the government, not to raise their voice for the government and brainwash the public. What happens to the journalists who raise their voices for the public, they are suppressed? In September 2019, A journalist showed how the children in a school of Uttar Pradesh were being served bread with salt as a part of the midday meal. They were not being served proper food. In response, the police booked the journalist on charges of criminal conspiracy. And the UP CM, Yogi Adityanath said that there will be proceedings against the journalist. They didn’t try to fix the issue.

In June 2019, A journalist was doing a story on a train derailment in Uttar Pradesh. Police arrested the journalist, he was urinated upon and kept in the lock-up and he was thrashed while he was kept in the lock-up. Just because he was exposing how to train derailment happened. It is the truth of the time, the government has consolidated a strong control over the media, especially the TV media. But there is a ray of hope visible on the internet. There are many online publication and journalists on the internet that can report freely.

In April 2019, A lot of people reported that their internet services provide are start randomly blocking websites like Reddit, Telegram and sound clouds. They have suddenly blocked these sites without stating anything or giving prior notification, when asked for a reason, none was stated by authorities, but some days later the websites were unblocked.

June 2019, Government ask WhatsApp to make its messages traceable so that it could be found out who originally started that message that was being forwarded. The WhatsApp refused to do so because it has end to end encryption. Nobody can read these messages in Whatsapp, neither the companies nor Whatsapp itself. But the Indian government wanted it done and gave the justification that they want to reduce “fake news”. In fact, the government spread the most fake news.

The public need to be very careful, they should choose mature networks. Who exactly know their responsibility and focus on the real issues of India. To be honest, Pakistan is not an issue. Infact they are already busy in their own problems. Instead misleading people media need to became voice for voiceless. This is the only way to see rising and shining India