India’s claim and Nepal’s legitimacy over the Kalapani 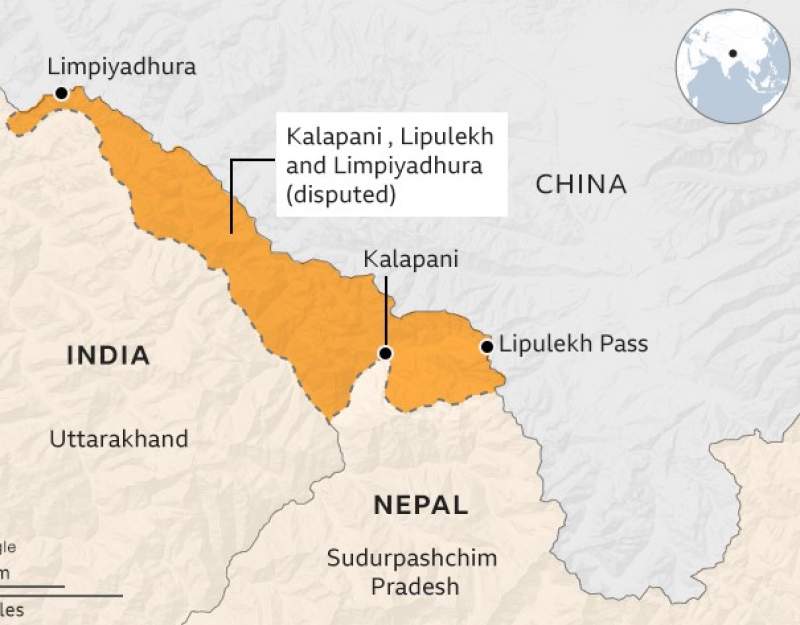 India posses territory of Nepal for at least sixty years. However, Nepal conducted a census in the early 1950s and emphasized the 1815 Sugauli Treaty to legitimize its claims on the KalaPani area. India's illegitimate control of the territory is changing the status co of the region. The region is strategically vital for Nepal, China, India, and the USA. India built the quickest road between Delhi to Tibet, undermine the sovereignty of Nepal.

Nepal claim of kalapani is historical, geographical and the flow of kali river proofs the legal and legitimate right on the territory. The escalatory move by India was virtually inaugurated in 2015 by the defense minister of India. They announced to build an 80km road, in the Himalaya range, connected to the lipulake pass. Nepali counterpart immediately condemns the violation by India in the kalapani region. Nepal deployed the police force and initiated the constitutional amendment to formalize the kalapani area, to make a legitimate part of Nepal.

The region is located in Tibet and the eastern south of Nepal. In the 1950s USA also urged and influenced this region to support and assist the Tibetian rebellions against China. The stakeholders want to make controversial kalapani area in this region. According to article 5, The king of Nepal claims the territory of Kalapani, which Britisher forcefully incorporated in the colonial rule.

India pressurizes Nepal to step back on the kalapani dispute; they also interfered in Nepalese foreign policy because millions of Nepalese and Gorkhas regiment are serving in India. AS we know, this region historically belongs to Nepal. The Nepali parliament presents Nepal's new map, which was voted by the 258 lawmakers, announced and endorsed by the parliament. India remained silent on this issue. However, they engage with all of its neighbors on the border dispute.

The border dispute between Nepal and India swiftly mobilize the public. The Nepal-India relationship is at its lowest point since the diplomatic engagements began. After India's unlawful act, Nepal's general public initiated a social media campaign with the hashtag #backoffindia. Despite the origin of Hinduism, the inclination towards nationalism increase after the dispute is from Nepal's land. The Indian government is blaming China for Nepal's unprecedented reaction against the Indian illegitimate occupation of kalapani. However, the question arises that why India is doing and who is doing illegitimate occupation from the behest. India's forces and agencies drag India into disputes that could not be prevented, which favorably affect India near future.

Nepal is a landlocked country; Nepal depends heavily on India to supply essential goods, including fuel and its ports for trade with other countries. India in 2015 imposed sanctions on Nepal's trade and announced to the connected road with lipulake pass. Nepal's government realized and used an alternate trade path to avoid and reduce India's monopoly in the region. Nepal accesses four ports of China: Tianjin, Shenzhen, Lianyungang, and Zhanjiang, a statement from Nepal's Commerce Ministry.

The historical evidence can observe India's interference in the Nepalese territories and politics. During the civil war of Nepal, India highly supported the rebellions. The purpose of supporting rebels was to destabilize Nepal and engage them in the civil war so India can easily divert the issue of Kalapani. However, Nepal took a strong stance on the Kalapani lake and the new map release in which Kala Pani is the legitimate part of Nepal. Although Nepal's old map also showed by the Director General of survey department of Nepal that kalapani is part of Nepal in the Map

in 1976. As history witnesses, the British forcefully enacted the treaty of Sugauli in 1816 when they defeat the Gorkhas. Gorkhas, and the last ruler of Gorkhas Prithvi Narayan, fought against the British's forceful occupation of kalapani.

India aimed of territory occupation in the region is to establish its hegemony. India is creating its trade routes monopoly in the region to counter the OBOR with the USA's help. For this, India is disrupting and occupying the territories to destabilize the region according to their wish in the future. Kalapani force full and illegal occupation is part of the grand plan of India. Nepal shifted its policies towards China instead of India. Nepal signed 35 projects with China under the BRI framework in Nepal, including infrastructure development, energy, and construction of integrated check posts, free trade area, and irrigation. Chinese money flew in for a series of hydropower projects and an investment of $130 million in a cement plant in Nepal. India's fear and eagerness to become a regional power drag region at the stake of flames. Nepalese legitimate right on Kalapani is evident to everyone. On both sides, Nepalese and Gorkhas tribes are living. Since the inception, they are living, and India is creating hindrances and occupying the land. On the other side, Nepal behaves like a mature and responsible actor in international relations. According to article 50.4, "The State shall direct its international relations towards enhancing the nation's dignity in the world community by maintaining international relations based on sovereign equality while safeguarding the freedom, sovereignty, territorial integrity, and independence and national interest. Nepal." The historical, technical, and cartographic claims of Nepal sides will probably lead to come out from the influence of India with the evidence of river alignments and other contentious criteria.