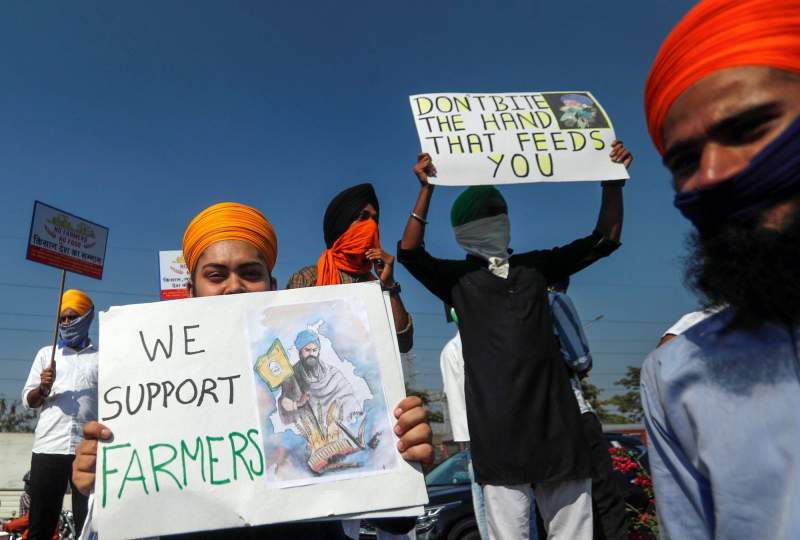 India, world largest populated country comprised of 18% of world’s total population is much dependent upon agriculture. It has seen robust demand of agricultural products with the increase in its population. Indian agriculture industry represents an important component of its economy, as it contributes to its GDP as well as employment opportunities in the country. 60% of India’s population works in agriculture industry and 27.48% is contributed to its GDP. According to the World Bank as of 2015, about 38% of India’s land area is suitable for agriculture and this area has been decreasing continuously because of urbanization. Around 51% of India s geographical area is under cultivation. India’s total arable land area of 159.7 million hectares (394.6 million acres) is the second largest in the world, after the US whereas its irrigated crop area of 82.6 million hectares (215.6 million acres) is largest in the world.

Agriculture dominated country has been observing months-long protest by farmers opposing new farm laws seeking to reshape India’s economy. New laws presented by Indian government that eased restrictions on private players in agriculture sector, enraged farmers. Soon after the acts were introduced in September 2020, protest started on August 9th, 2020, at northern India farm belt which is an epicenter of the Green Revolution since the 1950s. After continuous protest for two months, tens and thousands of Punjab farmers started marching towards capital, New Delhi. Government of India responded to protestors by deploying troops along with water cannons, tear gas shells, barbed wires and other fences at the entrance points of capital. It is one on the longest farmers protest India has ever witnessed which has outspread in the country.

The tense standoff between farmers and government started when the government of India gave three new controversial farm laws aimed at liberalizing farming sector. These laws are “The Farmers’ Produce Trade and Commerce (Promotion and Facilitation) Act, The Farmers (Empowerment and Protection) Agreement of Price Assurance and Farm Services Act, and The Essential Commodities (Amendment) Act.” These laws first come as ordinance before being approved by the parliament. The ruling BJP claims that new laws will allow farmers to sell their crops anywhere and to anyone they like, who will pay a minimum support price (MSP) for certain produce instead of selling them to government regulated wholesale markets. Whereas, farmers argue that the government is stepping back from its responsibility to ensure MSP for farm production and these new laws will leave government on the mercy of corporations. However, these corporations can now enter into India’s farming sector without any safeguards by government. Farmers say that these new laws will hurt their profit and will destroy small producer or the little man and will only benefit large corporations at the expense of smaller producers. Farmers want repeal of these laws.

Protest turned violent when police and farmers clashed on several points at the entrance of New Delhi albeit, excessive use of force against its own citizens seemed to be a warlike defense. Cutting down electricity, shutting off water, blocking internet service and use of heavy handed security, all explains India’s democratic standing. Today, India is the most populous nation of the world with 1.3 billion of population whose primary source of livelihood for about 58% of its population is agriculture. India agriculture production has reached record high but after the rise of right-wing authoritarianism (BJP) it has just taken a nosedive. Narendra Modi following radicalized approach under the covering of patriotism and secularism for the development of India is merely suppressing minorities and little man of the country. However, this movement of farmers is not ethno-nationalism but is in opposition to Modi policies. Farmers protest rooted in Punjab, Sikh community is now supported all across country.

Despite the inhumane acts of the flag bearer of world democracy, west is watching silently and not uttering single word against Modi regime because of its own interest. As these protests also seems to have geopolitical consequences, US is only promoting rise of India to counterbalance china in the region however, today India has a long way to go to compete with China. New Biden administration has offered open support for Modi irrespective of the thought that New Delhi is promoting violence against minorities and an average citizen of the country. Outrage of farmers and the protest turning violent, nothing bothers west, it only points towards what is on stake geopolitically for them. For decades, West has been turning a blind eye towards unlawful, appalling actions and grotesque technique of Indian government towards its people. Despite, month’s long protest, voice of farmers is still gone unheard in India as well as west.

There is no doubt that market-friendly laws eliminating government regulatory support will deprive farmers of their little chance of livelihood. There may be other big cities and markets but most of the population still gets livelihood and food from local farming population. For years, debts and bankruptcies have been pushing Indian farmers to suicide, with noticed high rates in recent years. The economic importance of agriculture sector has declined over past years hence, Indian government needs to rethink about these laws and its policies for a normal citizen who is at the verge of despair. Indian government on one hand promoting rise of agriculture industry whereas, on the other hand it is suppressing voice of farmers by using force. Nevertheless, all the perceived threats to the income of demonstrators need to be addressed.