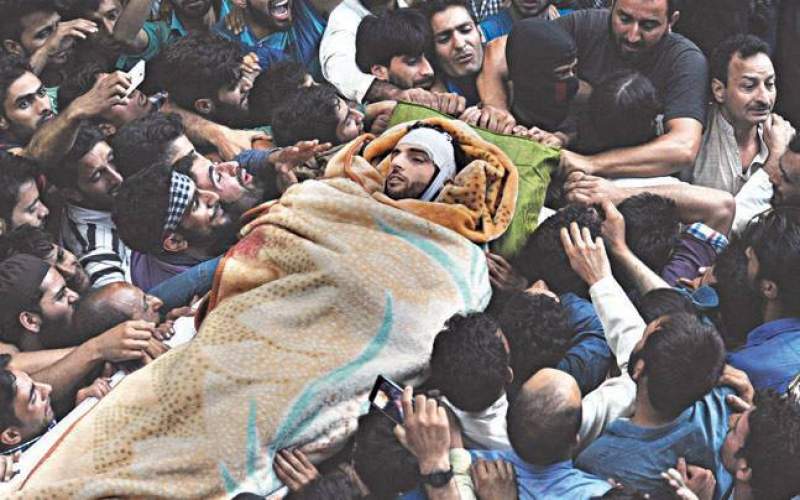 8th July commemorates the martyrdom of Kashmiri youth leader popularly known as Burhan Muzaffar Wani by Indian military along with his two associates in 2016. A complete shutdown is being imposed on both sides of Kashmir on the fifth martyrdom anniversary of Kashmiri youth leader, Burhan Wani and his two associates, who were brutally killed by Indian troops in Indian Occupied Kashmir to suppress the indigenous freedom movement of Kashmir’s people in Indian Occupied Jammu and Kashmir against the true wishes and aspirations of the people of Indian occupied Kashmir.

Burhan Wani along with his associates, Sartaj Ahmad and Parvez Ahmad was extra-judicially killed by Indian troops in Indian Occupied Kashmir. The day is being observed the as a “Day with Martyr’s Family”. Earlier, the leaders of (APHC) All Parties Hurriyat Conference paid rich tributes to Burhan Wani and called for a complete strike down across the Indian Occupied Kashmir to lodge and convey their strong message to the world that the people of occupied Kashmir will carry on their peaceful freedom movement till the last breath of their lives for the independence of its motherland from the ruthless and cruel clutches of Indian government.

The people of Tral locality in Indian Occupied Kashmir are also observing his martyrdom anniversary which is the hometown of Burhan Muzaffar Wani. A complete shutdown, marked by curfew imposed by Indian forces, is being observed across occupied Kashmir on Thursday to control the movement for remembrance of martyrdom of Burhan Wani, a symbolic young Mujahid commander, who was head of operations in Hizbul Mujahideen, the main and largest indigenous freedom fighter group in Indian-occupied Kashmir, brutally killed along with two other colleagues by the Indian army during a so-called encounter in Bamdoora village of held Kashmir’s Kokernag area on 8th July 2016.

The Indian forces have blocked all the main roads leading towards Burhan’s native town of Dadsara, some 33 kilometers (20 miles) southeast of the regional capital Srinagar and Wani’s house as well as the graveyard where he is buried in Tral his ancestral hometown to prevent the people. In the meantime, thousands of Indian soldiers, paramilitary forces and police personnel were deployed across occupied Kashmir to enforce strict curfew.

Despite the curfew and strict constraints, thousands of Kshmiris are carrying Wani's pictures placards, saying 'March Towards Tral', which is widely being seen on highways and streets of major cities in occupied Kashmir, including Srinagar, Budgam, Ganderbal, Kulgam and Islamabad as well as other districts and cities. Burhan Wani, who was the son of a school principal had become the symbolic figure of armed struggle in Indian-occupied Kashmir since 2011. Active in using social media wearing military dresses and holding assault guns, he sent video messages to invite Kashmir’s youth to join anti-India armed-struggle.

In the aftermath of his martyrdom, the held territory underwent the longest ever curfew of more than 100 days during which the occupation forces ruthlessly killed hundreds of Kashmir’s people. Burhan 22, when killed; gave rise to new-heights to freedom movement that was marked by widespread use of social media, open display of arms and educated young people taking up arms. That’s why; the Indian authorities cut internet connections in these districts, which have become the hub of an armed insurgency against India for the last so many years. The occupation forces also banned all kinds of communications on Thursday morning in all parts of the town of Sopore, once a stronghold of Burhan's parent militant organization, Hizb-ul-Mujahideen, in northern Kashmir.

Burhan's killing had sparked months of anti-India protests and clashes, during which more than 120 protesters were shot dead and thousands were injured and arrested. More than 1,000 people suffered and lost their eyes by metal pelleting by Indian forces into protesting crowds. Burhan's funeral was believed to have been the biggest in recent history, with estimates between 100,000 and 200,000 praying and attending his burial.

The Kashmiri youth leader, Burhan Wani revived and infused a new spirit in the freedom movement against India, Kashmir which is a Muslim-majority Himalayan region, held by India illegally since the partition in 1947. Pakistan and India have fought three wars in 1948, 1965, and 1971, two of them over Kashmir, and also in Siachen glacier in northern Kashmir, Indian and Pakistani troops have fought intermittently since 1984. A truce took effect in 2003.The Majority of Kashmiri groups in Jammu and Kashmir have been fighting against Indian rule for independence, or for unification with neighbouring Pakistan and thousands of innocent Kashmir’s people have inhumanely been killed in the armed struggle since 1989 and on ward till the date. The sacrifices of the Kashmiris should not go waste and the United Nations Organizations must implement its resolutions for the plebiscite in disputed Jammu and Kashmir state to stop Indian atrocities against the unarmed innocent Kashmiris. One wonders how many Burhan Wanis the Kashmiris have to sacrifice in order to get their legitimate right of self-determination.