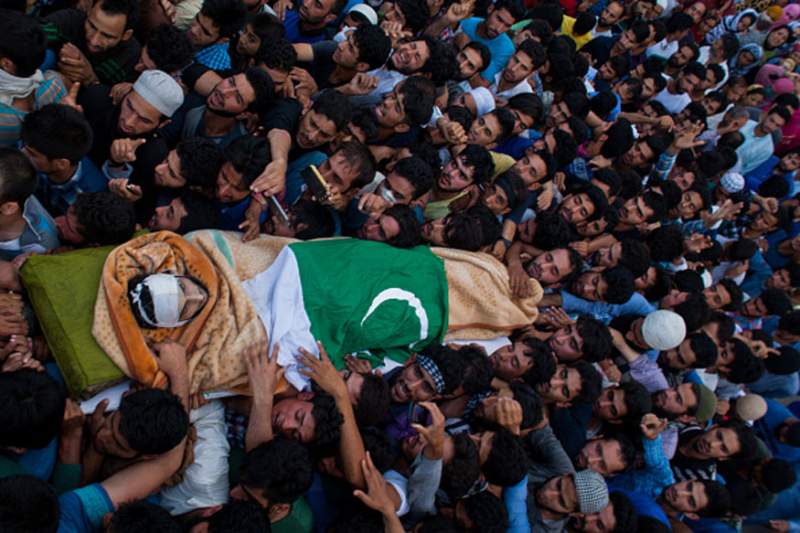 July 8th, is marked as death anniversary of freedom fighter of Jammu and Kashmir Burhan Muzzaffar Wani, who was dubbed as a militant by India authorities and was martyred by Indian security forces along with his two colleagues Saraj Ahmad Sheikh and Pervaiz Ahmad Lashkari at Bumdoora village in Kokernag area on July 8, 2016. A young boy, who challenged massive Indian forces made a drastic shift in the mindset and operational thinking of youth of Indian Illegally occupied Jammu & Kashmir. Besides this, Burhan Wani turned the longest-standing conflict into freedom movement of Kashmiris. Albeit, Kashmir fight for freedom started just after the independence of Pakistan but it gained momentum after valiant Burhan Wani’s struggle for liberation and right to self-determination.

Since the emergence of Pakistan, Kashmir has remained an area of conflict between both countries. The grotesque genocide of Kashmiri’s, human rights abuses and violence by Indian security forces against defenseless people of IIOJK is the reason behind the struggle for liberation.  In this Kashmir movement hundreds of Kashmiri freedom fighters were jailed, tortured, exiled and succumbed to death by Indian security forces. Burhan Wani was also amongst those fighters who have been martyred by Indian forces because India considered him as a threat, who could strengthen freedom fight of Kashmiris. Burhan Wani was the commander of the largest indigenous Kashmiri freedom fighters orgnaisaiton “Hizbul Mujahideen”. He joined armed struggle in 2010 to fight against the oppression, inhumane and barbaric acts of Indian security forces in IIOJK and was very popular on Social media since 2011.

Wani used social media to educate Kashmir youth and promoted freedom struggle. He was extremely active on social media and making full use of it, he created awareness among Kashmiri youth to fight for independence. He had given a complete shift to the freedom movement of Kashmir. Death of Burhan Wani, an iconic youth leader sparked an uprising in the valley. Massive anti-Indian protests were started in the valley due to which Indian security forces imposed longest curfew in the region of more than 100 days after which hundreds of Kashmiris were killed and beaten by Indian security forces.

Jammu & Kashmir, which is one of the most militarized zone in the world, where Kashmiri freedom fighters have fought for decades against Indian atrocities and despite facing every day to day aggression of Indian forces, these valiant freedom fighters have continued their fight for freedom plus given hopes to the innocent people of IIOJK where their quality of life is worse. It will not be wrong in saying that Kashmir fight for freedom is still alive because of these valiant freedom fighters. From the start till now, Jammu & Kashmir has been a mock-democracy and people of the region have been at the bottom of India’s pyramid of priority. Albeit, Burhan wani, the voice of Kashmiri youth will be remembered as symbol of bravery, which has always taken stand against Indian atrocities.

Today, on the 5th martyrdom anniversary of Burhan Wani, Kashmiri’s are paying him tribute. Jammu & Kashmir liberation alliance displayed posters and called strike on July 8th to express solidarity with the families of martyred Kashmiris. The posters, displayed by Jammu and Kashmir Liberation Alliance gave strike call to express solidarity with the families of martyred along with that many other freedom groups and organizations including Youth Democratic Political Movement, Jammu and Kashmir Tehreek-e-Azadi, Political Resistance Movement (JKPRM), Jammu and Kashmir Justice and Peace Initiative (JKJPI), Jammu and Kashmir Justice League (JKJL), Kashmir Resistance Movement (KRM), Kashmir Hurriyat Forum (KHF), Wareseen-e-Shuda, Sada-e-Mazloomeen also displayed their posters and urged Kashmiri people to observe a strike on death anniversary of Burhan Wani. A complete shutdown is being observed in the valley to commemorate the martyrdom anniversary.

Today in IIOJK, democracy and politics are in turmoil, peace seems nowhere, region has been torn apart, Indian aggression has crossed all limits but the world is numb and has merely became a spectator. Massive use of force, killings, blinding and other human rights violation are on rise. Kashmiri’s are being marginalized in their own state. Albeit, the freedom movement started by Burhan Wani’s changed the landscape of Jammu & Kashmir and was the groundwork of the current resistance movement against atrocities and Indian rule. The struggle of wani still resonates loudly within Kashmir, which motivates and gives hope to people of Kashmir to stand up for their right of self-determination. Freedom fighter Burhan wani gave new life to the fight of Kashmiris against oppression and kept the issue alive. Undoubtedly, Indian government has miscalculated this as always that by killing of freedom fighter Burhan Wani everything will be in their hands and they will be successful in gaining their objectives but today, the freedom movement started by Wani gain more momentum and will be continued till Kashmir’s get their right of self-determination.