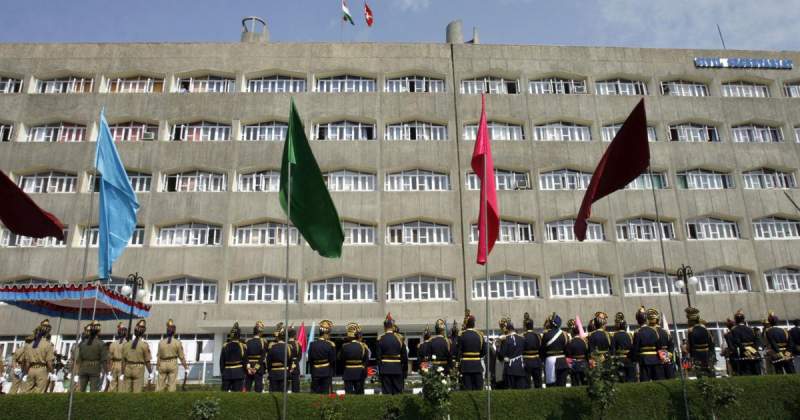 The bias and controversial dismissals of public servants in Kashmir by India government to tame the freedom movement has sparked wide-spread protests inside Indian occupied Kashmir. The removals were made under the excuse of defending "state security. Six public employees have been dismissed under the pretext of protecting state security. “Their termination orders were passed under sub-clause (c) of the proviso to clause (2) of Article 311 of the Constitution of India which stated that in the interest of the security of the State, it is not expedient to hold an enquiry in their cases before terminating their services with immediate effect”, official sources said. Three others Government employees were dismissed from services on April 30, 2021 by the UT administration under similar charges.

In occupied Kashmir India wants to tighten its grip on government employees to keep the Kashmiris people in state of constant fear. In the 2016" a 42-year-old math teacher Muhammad Yusuf Ganaie at a boys' school, was suspended after being accused of throwing stones during mass rally in 2016 against the killing of young insurgent commander Burhan Wani. After spending a year in jail, Ganaie was again arrested in 2019 when the region's government launched a huge crackdown on leaders, traders and young people. "He spent two years in jail, and he was hopeful that he would be reinstated but now his dismissal comes as a shock to the whole family. “No exact reasons were given for the sackings including three teachers, an assistant professor, a police officer and a revenue official. The latest dismissals are highly unjustified and an effort to threaten and cow-down public servants to suppress and undermine the right of self-determination of Kashmiris people.

On October 2017, Syed Salahuddin’s son Syed Shahid Yusuf was arrested in the case for allegedly receiving money from his father, who is currently based in Pakistan. Shahid Yusuf was working in the Agriculture department. The Indian government blamed the other sacked persons for so called anti state activities including two policemen, they were accused to work for terrorist organizations and providing shelter, transporting arms consignment and spreading propaganda on social media platforms for Kashmir cause. The eldest son Shakeel Yusuf was also arrested by the NIA in connection with a 2011 terror funding in the same case for allegedly receiving money from his father in August 2018 at the time of the arrest, he was working as a laboratory assistant at a prestigious Government hospital in Srinagar. In these 11 dismissed employees, four were working in the education department, two in the Jammu Kashmir Police and one each in the agriculture, skill development, power and health departments, and SKIMS.

The regional government, which underwent many political changes after being stripped of its limited autonomy in August 2019, ordered the formation of a special task force to scrutinize the cases of employees suspected of being involved in "anti-national activities." The six employees were fired under an article of the constitution that gives the government authority to remove a public servant from their role without any inquiry. It all clearly shows that the implementation of above-mentioned bias and controversial law was meant to create fear and sense of insecurity among Muslims in the region. The government employees from once the scenic valley of Indian occupied Kashmir feel rightly that these dismissals are discriminatory and went on to say that it's an attack on us because of our religious identity.

The Jammu and Kashmir government is the largest employer in the region, with nearly 450,000 employees. The regional government also passed an order saying that no new employee would be paid their salary or allowances until they had undergone a verification process by the top investigative agency, the Criminal Investigation Department (CID) the new hires were asked to submit details about their social media accounts like Twitter, Facebook and other social network to "target and restrict their freedom of expression." The government made a change to the Jammu and Kashmir civil service regulations allowing the authorities to forcibly retire any public servant over 48 years old or who has completed 22 years of service as the changes in the laws are politically motivated and that leads to complete chaos and violence in society .

The National Conference, the pro-Indian political party that has ruled for most of the last seven decades in the region, said the measures are meant to "alienate" the people. "The government should have focused on boosting coronavirus care rather than firing employees in an elusive manner in which they cannot even resort to legal recourse to protect their rights,". The pro-freedom political parties led by Mirwaiz Umar Farooq who heads the All Parties Hurriyat Conference (APHC), a coalition of separatist leaders in the region called the actions a form of "harassment of government employees. “To render people jobless in such a manner by invoking a draconian law is intimidation” and as “inhuman and cruel”.

All these discriminatory laws and dismissals of these sacked employees from service without properly hearing them are not only against the basic principles of natural justice but show the prejudice of Indian government against the Kashmir’s people. It is difficult to understand that how a teacher or an assistant professor could be a threat to the national security of a powerful country like India. It would be good for Indian government to maintain the larger public good and facilitate its citizens rather than to destroy the image of largest democracy in the world.