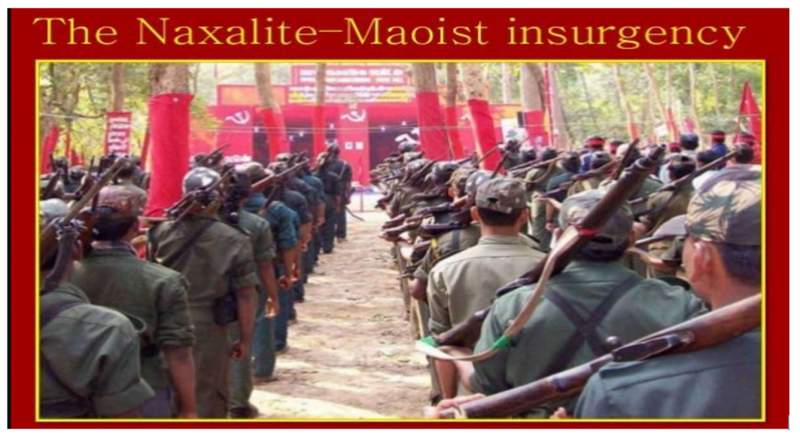 India's Maoist (Naxalite) insurgency is one of the biggest internal security threat. The Maoist insurgency started as communist peasant revolt in late 1950s and early 1960s in India. Later on it turned into a combination of ethnic, caste, class-based political and socioeconomic battle in many poorest provinces in East of India. The first armed uprising against landlords of the Naxalbari village in eastern state of India of West Bengal was launched on 1967 which sowed the seed of insurgency.  This armed uprising inspired other rebels in the country and became known as Naxalism or Naxalite movement, which was originated as a Maoist movement, struggling for liberation in the small village along India-Nepal border.

The Maoists waged an armed struggle against Indian government for decades and are considered as India’s biggest internal security threat. This movement was named as Left-Wing Extremism (LWE) by government of India. The Naxalites operate in about 90 districts across 11 states of India and fighting against Indian government and security forces. Naxal insurgency has moved to the southern states of India, leaded by Communist Party of India (Maoists) and is active in the states of Chhattisgarh, Bihar, Jharkhand, Maharashtra, Odisha, Andhra Pradesh and Telangana, where they mainly operate in mineral-rich territory or forest area in the east and south of the country also known as “Red corridor.”

The people from the tribal areas were driven to join the Maoists due to the grievances with the government of India, who started a series of development projects in the 1980s and removed these tribals from their land in the name of public greater good. Most of the land area was inhabited by tribal people but the acquiring of land by government for mining operations and other projects rehabilitated millions of natives and thus the systematic marginalization contributed to the insurgency movement. Undoubtedly, the government resettlement programs are clearly at fault which alienated and marginalized tribal population. The insurgency seems unlikely to end because the Maoists will continue to support tribals until the government does not meet their grievances of its own people.

Recently, Indian security forces have increased operations against ultra-left-wing guerrillas in the country and regular clashes are witnessed between the Maoists and the security forces. On 3rd April, 2021, about 22 members of Indian security forces were killed, 31 injured and 29 Maoists including women and children were killed during a four-hour gun battle between both in Sukma District of Chhattisgarh.  Earlier, on 23rd March, 2021, 5 security personnel were killed and at least 13 were injured in Narayanpur district of Chhattisgarh.  Currently, the number of Maoist-linked incidents have decreased due to the heavy operations of Indian security forces against them. However, it seems from the policy of Indian government for the Maoists and the poor tribals against which the Indian government is fighting and killing them with pride are not countrymen as much as the powerful are.

The police in one of the districts in Chhattisgarh have published findings of survey conducted in January, which figures out Maoist strongholds in the region however, later in July investigation was followed up and results showed that 15 villages were free of Maoists.  However, it cannot be predicted that the insurgency in the region is completely over because the Naxal movement is mainly supported by tribal population of the country, who are neglected by the government and left behind in India's economic boom.

Naxalite movement takes up the cause of marginalized section of society in India. The economic marginalization, poverty, social exclusion, political instability, corruption, supremacy of landlords and several other factors have contributed to the ongoing Maoist insurgency. According to United Nations Human development index report 2020, India has been positioned at 131 out of 189 countries and territories, slipping two positions down than previous year. People are deprived of their basic rights. Increase in poverty and the treatment of Indian government with the people has created hatred for local and central administration. The cycle of resistance and revenge between powerful and poor led to such insurgencies.

Albeit, the battle between the Maoists and the Indian government cannot be overlooked, it is indeed very complex and the heavy presence of security forces and armed personnel have strained the situation more. Moreover, Indian government has failed to tackle tribal grievances. The government’s view to eliminate Maoist’s military through operations against them is not the solution of the problem because a number of unsatisfied people from indigenous communities join this insurgent group and Indian government and security forces are busy in killing their own people.

Insurgencies do not arise in vacuum. The frustrations, grievances and other unheard demands of people motivates such revolts against the government. Today, there is a rift between poor and rich in India, which needs to be reduced. A new wave of Maoist insurgency cannot be terminated if the rich continues to get richer and the poor get poorer day by day.  The benefits of economic growth should be for the people who really need it. The systematic economic exploitation in urban areas of India need serious attention because these socioeconomic factors inspire Naxal insurgency and in addition, the conflicting views need to be heard by the government.