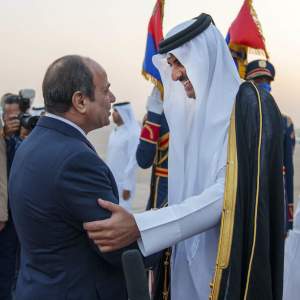 Local media reported “the two leaders are expected to discuss on Saturday key regional issues ahead of President Joe Biden’s anticipated trip to the Middle East next month and on ways to further improve diplomatic and economic relations.”

The emir's visit came less than two months after his government announced that it would invest $5 billion in Egypt, another lifeline to the country's economy which has been dealt a blow amid the Russian invasion of Ukraine. 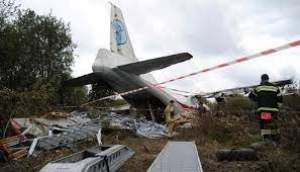 The heavylift Il-76 cargo plane went down in the southwestern Ryazan region.

The Russian Defense Ministry said “the plane suffered an engine problem that forced the crew to crash-land it on the ground.”

The regional administration said that four of its crew were killed and a further five were injured when the plane slammed into a field just outside the city of Ryazan.

Officials said “those injured were hospitalized in grave condition.” 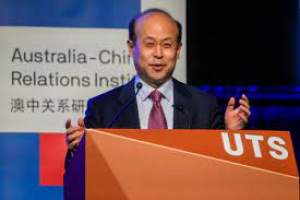 CANBERRA, 25 June 2022, (TON): A Chinese ambassador said “Australia had fired the first shot in its deteriorating relations with China four years ago when the then-government banned Chinese-owned telecommunications giant Huawei from rolling out the country’s 5G network due to security concerns.”

In Beijing, Chinese Foreign Ministry spokesperson Wang Wenbin said “he was not aware of the human rights protesters at Xiao’s speech, but we hope the relevant people will observe basic diplomatic protocol.”

The address comes as China shows signs of thawing a diplomatic deepfreeze of Australian ministers following the election of a new government last month. 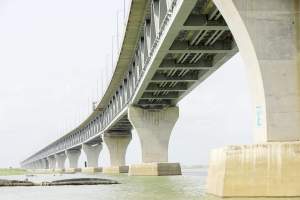 The high commission in a media release said "the Padma Bridge would not only help improve intra-Bangladesh connectivity, but it will also provide much-needed impetus to logistics and businesses connecting India and our shared subregion.”

The high commission said “the completion of this long-awaited project is testimony to the courageous decisions and far-sighted leadership of Prime Minister Sheikh Hasina.” 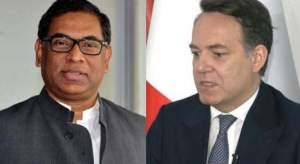 DHAKA, 25 June 2022, (TON): Ambassador of Italy to Bangladesh Enrico Nunziata  paid a courtesy call on State Minister for Power, Energy and Mineral Resources Nasrul Hamid at the latter's office at the secretariat.

A press release said “during the meeting, they discussed several bilateral issues related to Italy-Bangladesh.” 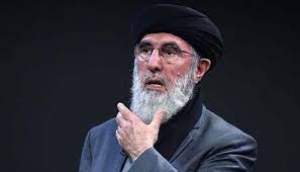 KABUL, 25 June 2022, (TON): Former prime minister of Afghanistan and chief of Hizb-e-Islami Gulbuddin Hekmatyar has urged the governments of Pakistan and Afghanistan to take sincere and effective steps for overcoming the widening gap.

In an exclusive chat with a group of Pakistani journalists at his residence here, he said steps should be taken to overcome misconceptions and trust deficit between the two neighbouring Muslim countries.

He added “I see the gap between Islamabad and Kabul is widening and on the other hand Kabul and Delhi are coming closer to each other.”

He said “if Pakistan has some concerns over Tehrik-e-Taliban Pakistan (TTP), the matter should be resolved through joint sincere efforts.”

He added “the TTP was formed and activated during the US aggression here. It was an old issue and it should not be linked with the current government of Afghanistan.” 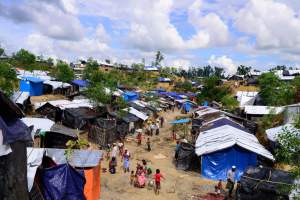 Foreign Minister AK Abdul Momen has reiterated that the earliest repatriation of all forcibly displaced Rohingyas back to their ancestral homeland in Rakhine in safety and dignity remains Bangladesh’s compelling priority.

Momen raised the issue during his intervention at the Commonwealth Foreign Affairs Ministers Meeting held in Rwandan Capital Kigali.

He appreciated the Commonwealth nations for incorporating a special text on the Rohingya crisis in the Heads of Governments Communiqué. 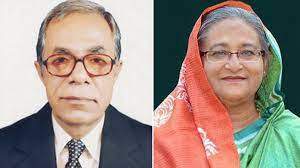 DHAKA, 25 June 2022, (TON): President M Abdul Hamid and Prime Minister Sheikh Hasina greeted all who were involved in the implementation of the Padma Bridge project as the bridge will be inaugurated.

On the eve of the historic day, they also greeted the countrymen issuing separate messages.

In his message, the president said “I am very happy to know that the Padma Bridge, a symbol of Bangladesh’s self-reliance and self-respect, is being inaugurated. I extend my best wishes to all those involved in the implementation of this project.”

The head of the state added “as a result of adoption and implementation of extensive development activities of the government, unprecedented improvement has been achieved in the communication system of the country.” 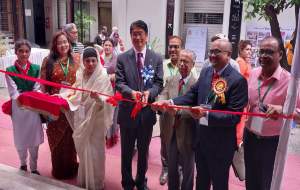 He said “I hope Ikebana will be loved by young people in Bangladesh.”

The ambassador said there is a strong interest among the young students of Bangladesh about Japan, its language and culture.

He urged the BIA to continue playing its role in further promoting friendship through a better understanding of Japanese culture.

Ambassador Naoki said “I hope the activities of BIA will be increased further. We will be very happy to provide further moral support to BIA.” 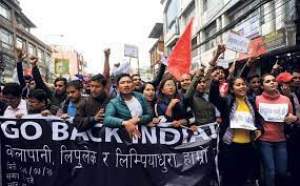 Prime Minister Narendra Modi did not just come in a chopper landing on Lumbini for the occasion of Buddha Purnima, making his fifth visit there but there had been different other motives that were there in the background too.

Although it all appeared like it was a religious trip, it was then focused on other bilateral ties in fields relating to culture, technology, education, electricity, and development. It was during that visit, that Modi laid the foundation based stone on India International Centre for Buddhist Culture and Heritage in Lumbini's Monastic Zone where there had been a total of six memoranda of understanding which were signed by Indian and Nepali counterparts - overseen by prime ministers that would extend and consolidate the cultural aspect, technological along with educational ties. There was agreement among the Indian Council of Cultural Relations (ICCR) and Tribhuvan University along with Kathmandu University for the establishment of a research chair on Indian studies.

There was also an agreement between Lumbini Buddhist University and ICCR for establishing Ambedkar Chair for Buddhist studies there. Academically, there was then the next set of agreements between the Indian Institute of Technology (IIT) Madras and Kathmandu University for a joint degree program at the Master's Level. There was the next agreement that was signed where India's Satluj Jal Vidyut Nigam Ltd and the Nepal Electricity Authority (NEA) signed an agreement for the development and implementation of the Arun IV hydropower project there.

This Modi's visit then welcomed Nepal's Primeminister Deuba on New Delhi's visit for three days. During this visit, there were four major agreements were signed. This included joining the international solar alliance, Indian technical assistance for Nepal's railway sector, cooperation in the field of the petroleum sector, and ultimately an exchange of expertise between Nepal Oil Corporation and the Indian Oil Corporation.

This set of agreements was announced after they had delegation talk levels where both prime ministers flagged off Kurtha Jayanagar cross-border passenger train services. There was a joint launch from Deuba and Modi for India's RuPay digital card for being used in Nepal and then jointly inaugurated Solu Corridor 132 KV Power Transmission Line and Substation in Nepal which was built under the Government of India's Line of credit.

Nepal's prime minister proposed to resolve boundary disputes through bilateral mechanisms and then he mostly appreciated the friendly ties that both the nation held. This has been a practice, every time the bilateral diplomatic talk between two nations come into the existence, there appear certain bases and something that would be seen to be attractive there. They will certainly play some vital role on the surface and something amazing and impressive treaties will be coming out. But, things just don't rely on those factors, there are several hidden and grounded pictures that come around on the surface too. The movement and scenario which plays the role there will certainly play vital importance. These dimensions here will hold several restrictions too. India had been promising various prosperity-based agreements to Nepal and was hit when they came up with the motto of 'Neighbor First' too.

But, things were not as easy as they appeared in reality. Though there had remained huge support from India's side in voices and speeches; even in agreements and signings but the case was different at the time of implementation there. They had promised something really big during the earthquake that Nepal went through - but that all turned out to be some kind of fake hope. No one could utter a word, and it all went in vain. Where India betrayed Nepal badly was at the time of their demonetization too, leaving thousands of Indian currencies in Nepal go wasted. I lost a few thousand rupees, as it went wasted! There was no support from the Reserve Bank of India, and I had no place to exchange those Indian Currencies then too.

Whenever they meet, they discuss something chocolaty, but the hard factors like Sugauli Treaty’s revision or border encroachment issues remain suppressed. As Marx said, a bigger nation will keep dominating smaller nations and this will continue for a long – the perfect scene can be traced out there too. Though these two nations share culture and living patterns to large extent, there is not anything huge too. Nepal has no choice, but to remain suppressed – as everything from salt to bigger trade – Nepal has to be dependent on India, the dark side of the landlocked nation.

The treaties will be signed, will be made big news – but time explains – they are signed just for the sake of being signed.