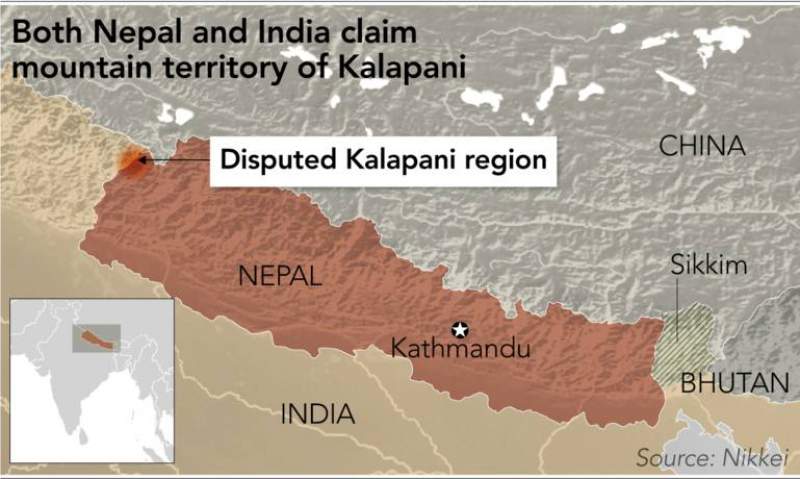 When India announced its new political map in 2019, after the revocation of Article 370, it included territories claimed by Nepal. However, at that time the government in Kathmandu took it up officially and publically. Subsequently, after the publication of map by India, youths and students of the ruling Nepal Communist Party and the opposition Nepali Congress came on the streets. The Nepal government described India’s decision as “unilateral” and claimed that it will “defend its international border”.

In line with democratization and competitive nationalism, Nepal parliament unanimously passed a bill and redraw the country’s map in 2020, including the demarcation of Lipulekh mountain pass, Kalapani and Limpiyadhura the areas of Nepal which illegally occupied by India. India objected to Nepal’s move to the inclusion of Lipulekh mountain pass, Kalapani and Limpiyadhura in its territory and warned the Nepal for doing so. The Nepalese government claimed that India has made intrusions into the disputed region by building the Darchula-Lipulekh link road despite repeated objections and India media always showed the distorted facts in this regard.

India inaugurated a new 80 km-long road in the Himalayas, connecting to the border with China, at the Lipulekh pass. The Nepali government protested immediately, contending that the road crosses in its territory that it claims and accused India of changing the status quo unilaterally.  Since then, Nepal deployed police forces to the region, summoned the Indian ambassador in Kathmandu, and made constitutional amendment to formalize and extend its territorial claims over 372 sq. km.

Over the time, the bilateral crisis seems to be stalemate, a worrisome trend in otherwise friendly India-Nepal relations, the crisis, the factors that escalated the dispute, the geostrategic context, and ways to de-escalate grim issue. Nepal has one of the world’s youngest populations and, especially after India’s implicit support for the 2015 blockade on the landlocked country, anti-Indian sentiments have been running high.

This is one of the reasons that why Nepal chose not to attend a multilateral BIMSTEC counter-terrorism exercise hosted by India, in 2018. Delhi had then expressed its disappointment, especially about the Nepali government caving in to popular reservations about BIMSTEC as an anti-China military alliance driven by India.

Nepal’s foreign policy establishment has embraced an ambitious and forward-looking agenda of external balancing and diversification in recent years, especially under the leadership of its Foreign Minister participation in the Fourth Indian Ocean Conference, held in the Maldives in 2019, reflects Kathmandu’s widening geostrategic horizons, seeking to place Nepal as a critical connectivity hub between China, South Asia and the Indian Ocean region. The border dispute between India and Nepal was brewing for years, so it is unreasonable to blame China for creating the crisis.

India alleged that Nepal may be bringing up the issue “at the behest” of a third party, referring to China.  All this does not mean that Beijing has not supported or further instigated Kathmandu to take on a more assertive position, especially against the backdrop of the China-India military standoff in Ladakh. This could have contributed to the severity of the India-Nepal crisis.

Nepal and several other Indian neighbors are young democracies, developing new institutions in a political transition that can be instable, as Indian interference is growing and may hinder further democratization, undermining the rule of law, or curtail critical media and academic independence.

As China’s political influence grows in Nepal and playing the China balancing card as a last resort, Nepali leaders hope to get Delhi to pay attention to festering problems that Indian diplomacy neglects or forgets about in the past. This is a risky game because it raises alarm bells in Delhi, especially in the security and strategic establishments, which are quick resort to coercive tools that can further, escalate the dispute. It is also risky because it assumes China is willing to extend indefinite support to Nepal at the cost of its relations with India.

The dispute has roots going back to the 1950s and there is also a second dispute with India in the Susta river border region. Moreover, there is also a possible issue at the Indian state of Sikkim. Nepal alleges that it tried twice to convene such talks since then, and received no positive response from Delhi and India is brushing the issue under the carpet.

On the one hand, in Nepal’s maximalist perspective cover all territories it claims, now also including Limpyadhura. The thinking in Kathmandu goes that if India conveys its own territorial claims in official maps, does it have any legitimacy to pressure Nepal not to come up with its own? On the other hand, in India’s minimalist perspective reflecting why it delayed dialogue. The current crisis has exposed the real facets of Indian largest democracy.

Currently, India can no longer afford to continue its past Cold War policies of right of first refusal. As Nepal is no longer an Indian sphere of influence. Nepal has been embracing a policy of strategic diversification to decrease its dependence on India and enhance its non-aligned self-sufficiency.

The influence of China has grown then before across the Himalayas, especially after the BRI project Nepal which win the hearts of young Nepalese. India still look at twenty-first century Nepal through a nineteenth century colonial prism as a buffer state with limited sovereignty, where India’s resources should be focused on political engineering and cultivate assets to topple the Nepalese governments at its whims and wishes. So both the governments are at loggerheads due to these territorial problems which have no solution at the sight. By stifling and not sparing even its tiny and small neighbor like Nepal, it is simplistic to assume that this crisis reflects a failure of India’s regional strategy and approach as a whole.