Where Pakistan and India are taking Kashmiris to - Pakistan's Kashmir Policy? 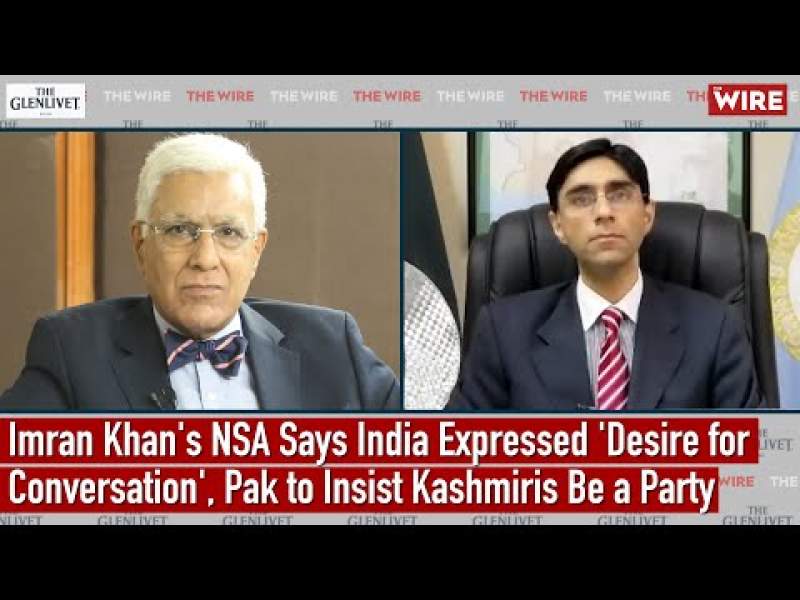 When it is time to make Indian atrocities in occupied Jammu and Kashmir internationalize and make world’s focus on disappearances of civilians, fake encounters by Indian security forces, custodial deaths, extra judicial killings and instances of rape, kidnapping, torture and extortion, something new emerged as the headlines of international and national media. It is being claimed that Pakistan, in a foreign policy shift has placed Kashmiris on the negotiation table as “Principal Party”. The new development is linked with Dr. Moeed Yousuf, Special Advisor to Prime Minister of Pakistan for National Security and Strategic Policy disclosure in an interview with senior Indian journalist, Karan Thapar on 13 October 2020, that there are three parties to the Jammu and Kashmir dispute; Pakistan, India and there is a principal party, called Kashmiris and the only thing that matters is the wishes of the people of Kashmir.

Let us see what Dr Moeed Yousaf said during an interview with Karan Thapar, “The practical problem is there are three parties to the Kashmir dispute – there is Pakistan, there is India, and there is the principal party – the humans called Kashmiris. Now, if the Kashmiris can’t stand the sight of India, can’t bear to be in the same room as Indians“. Again he said, “Let’s take Kashmir, three parties to the conflict – India, Pakistan, and the Kashmiris – one party does not want to sit in the same room as another party. So, that…” In another place, he said, “There are two steps to this process, there’s a plebiscite where India and Pakistan – the two options that are given under the UN resolutions Then there’s a second step, which you are not aware of – let me just answer your question. There’s an Article 257 of the Pakistani Constitution that says that after the plebiscite, Pakistan and the Kashmiris will decide what kind of arrangement they want.”

Some of the Kashmiri leaders attached to various think tanks abroad welcoming the statement of Dr. Moeed Yousuf is of the view that people of Kashmir want that as the dispute involves three parties –Government of India, Government of Pakistan, all of three stakeholders should be included in future negotiations.  Many Kashmiris has taken the statement of Dr. Moeed Yousuf as Pakistan’s new policy to include the Kashmiri leadership as a principal party in the talks. They are fighting with each other over the issue that which genuine leadership of the people of Jammu and Kashmir should take part in future negotiations. There are a lot many articles being published in line with Dr. Moeed Yousuf’s new policy statement that allows unidentified Kashmiri leadership at par with India and Pakistan. They are voicing against the previous agreement between India and Pakistan, as Dr. Ghulam Nabi Fai also pointed out in his recent statement, “The agreements between India and Pakistan, like Tashkent Declaration and Shimla Agreement failed because they sought to bypass the Kashmiri leadership”.

India is definitely boxing clever as Pakistan is diverting from the main issue which was pending before 5 August 2019, Government’s abrogation of Article 370 and 35 A, which were pending for decision before the Supreme Court of India. The fact can also be not denied that on 1st January, 2018, the Indian Union Ministry of Defense received requests from the Indian occupied Jammu and Kashmir Government for sanction to prosecute defense personnel in the 50 cases that occurred in-between 2001-2016. While the requests were pending in three cases, the Government had denied sanction to prosecute the accused. The case was in the Supreme Court to be decided upon, when in a 180-degree shift, Indian Government on 5th August 2019, announced revocation Article 370 and 35 A of the constitution, scrapping the special status of Jammu and Kashmir, in clear violations of United Nations Security Council Resolutions.

Interestingly, the Kashmiris have always received unequal and discriminatory treatment. The Supreme Court’s observation made in July 2016 that indefinite deployment of armed forces in the name of restoring normalcy under AFSPA “would mock at our democratic process “the Armed Forces (Jammu and Kashmir) Special Powers Act (AFSPA) of 1990 and its predecessor, the Jammu & Kashmir Public Safety Act (PSA), 1978. If we recall, in ordering a probe against fake encounters in Manipur, the Supreme Court, in its landmark judgment delivered in July 2016, remarked that, “ordinarily our armed forces should not be used against our countrymen and women” and that “every person carrying a weapon in a disturbed area cannot be labeled as a terrorist or insurgent.” In another development, India, a comprehensive job plan has been worked out for the youth of Indian occupied Jammu and Kashmir involving a cost of Rs 2100 crore and separate pledges from a number of foreign countries, including the US, Britain, Canada, Italy, France, etc. It is hoped by New Delhi that it will shut the desire of Kashmiris to join Pakistan once for all.

New Delhi is mistaken that Kashmiris are demanding union with Pakistan due to economic conditions and that improvement in social conditions as well as lifestyle would turn them into loyal Indians. The demand of the Kashmiris for right of self-determination would remain a burning issue till the time plebiscite is not held in entire state on the basis of United Nations Security Council resolutions. Had economic reasons or unemployment was the case, those Kashmiris who is well settled abroad would not have been active supporters of freedom movement and armed struggle against Indian occupation of Jammu and Kashmir state. No doubt, New Delhi is being misguided by its intelligence agencies and foreign experts that Kashmiris can be won by the introduction of reforms and allocation of huge funds. One wonder why the Indian authorities are unable to read the slogans on the wall everywhere in Indian occupied Jammu and Kashmir that only independence from India is the demand of Kashmiris. This email address is being protected from spambots. You need JavaScript enabled to view it.