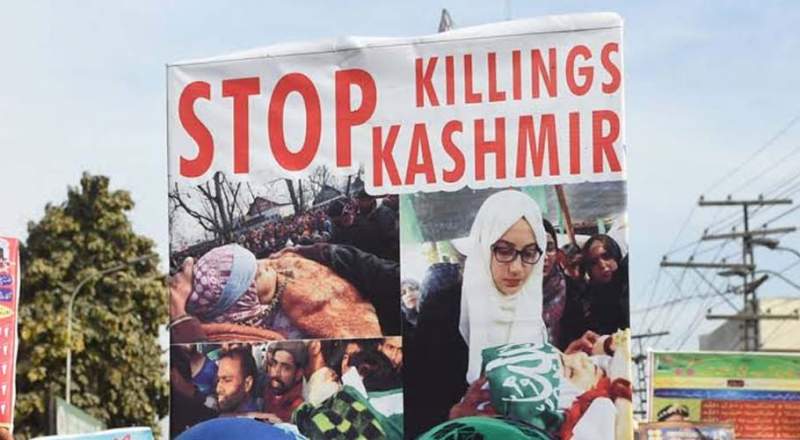 It was on this day in 1947 when Indian troops invaded Jammu and Kashmir and subjugated it in blatant violation of partition plan of the subcontinent and against the will and aspirations of Kashmiris. This year's day is of special significance as it is being observed in the backdrop of illegal and unilateral step of India to annex Kashmir on 5th of August.

The day highlights the 73 years of struggle of Kashmiris in their quest to right to self-determination. 27th October is remembered as a day in history when Kashmir was vended and India forcibly took over the land. Kashmir is a long standing dispute between Pakistan and India, which originated when the people of Jammu and Kashmir State were denied the right of self-determination in 1947. When India and Pakistan became independent on August 1947, it was generally assumed that Kashmir, as an adjoining state with a predominantly Muslim population, would accede to Pakistan. Its ruler, the Maharaja, however, on 27 October 1947 acceded to India through an improper and illegal Instrument of Accession and on the same day, India winched its forces to Srinagar and occupied the valley. It is for this reason that Kashmiris and supporters of Kashmir celebrate every year 27th of October as Black Day. It is the darkest day in history of Kashmir as Kashmiris were sold to India regardless of Indian Independence Act and Partition Plan.

History reveals that conferring to the Partition Plan, the then princely states were given the choice to accede either to Pakistan or India on the basis of their geography and demography, but New Delhi illegally occupied three States of Hyderabad, Junagarh and Jammu and Kashmir. Hyderabad and Junagarh were Hindu-majority States but their rulers were Muslims. Being a Muslim-majority state, with 87% Muslim population, Kashmir had a natural tendency to accede to Pakistan. But, tactlessly, the then Hindu ruler of Jammu and Kashmir, Maharaja Hari Singh, destroyed the future of Kashmiri people by announcing its accession to India under a controversial document, Instrument of Accession. Even the neutral spectators contradict the existence of such a document. In a bid to punish the Kashmiris for their desire to join Pakistan and with the intent to change the demographic structure and turn the results in favour of India in any plebiscite in future, Indian troops, the Dogra forces and  Hindu fanatics massacred over three hundred thousand Kashmiri Muslims within a period of two months in Jammu division. It is a historical fact that if the partition had been done on the principles of justice then India had no land route to enter into Jammu and Kashmir. But the so-called Boundary Commission headed by Redcliff which demarcated partition line, secretly gave Gurdaspur, a Muslim majority area to India thus providing it land access to the desired area.

The people of Kashmir rejected illegal Indian occupation since day one and they resisted against Indian forces. India, however, took the matter to UN Security Council on 1 January 1948, to stop Kashmiris to take over Jammu and Kashmir State by ingenious armed struggle. Consecutive resolutions passed by the Security Council invalidated Indian invasion in Occupied Kashmir. Through the resolutions passed on 13 August 1948, and 5 January 1949, the UN approved a ceasefire, demarcation of the ceasefire line, demilitarization of the State and a free and impartial plebiscite to be conducted under the supervision of the world body. However demilitarisation of IOK and plebiscite still remain unfulfilled. Today the geopolitical positioning of Kashmir has made it a nuclear flashpoint in South Asia. In 1954, Josef Korbel, father of Madeleine Albright (former US Secretary of State) in his book “Danger in Kashmir” said, “For today, as in past seven years, the two great nations of subcontinent, India and Pakistan, continue to dissipate their wealth, their strength and their energy on a near fratricidal struggle in which the hitherto almost unknown State of Kashmir has become the physical battleground”.

Today after many decades and India’s exhaustion on Kashmir in every aspect, it is unable to break the will of Kashmiris to adjoin Pakistan. Since the death of Burhan Wani, a young Kashmiri leader a new wave of uprising in Kashmir has emerged. Till today India is trying to suppress Kashmir freedom movement by all means. Unfortunately despite driving attention of world community and reminding India time and again of its barbarism in Kashmir, India only vowed to take tougher action against Kashmir’s protestors. The ruthless killings have led to spontaneous protests across the state against the continued brutalities of the Indian armed forces which has impunity under the Armed Forces Special Powers Act (AFSPA). Instead of reaching out to the people of Jammu and Kashmir and opening communication channels India often locks down the Kashmir valley through curfews. Even they are not allowed to offer Eid prayers, schools, shops, markets are forcibly shut down by Indian forces on any of the incident and Indian authorities often cripple all communications; jamming mobile and internet services, and seize offices of local newspapers and detain staff members. Many hospitals and ambulances have reportedly been damaged by security personnel and it still continues today whenever Indian army gets a chance to suppress protestors. The humanitarian crisis unfolding in Kashmir currently is not a one off. It has been an integral part of how India continues to rule over Kashmir. Such events have repeatedly occurred throughout the past three decades, with India continuing to look away from the writing on the wall. The current protests, and those in the three bloody summers of 2008-10, only reflect the resilience of the Kashmiri people and their demand for right to self-determination, which not only is guaranteed by UNSC resolutions, but was also promised by the Indian Parliament in 1948.

The massive suppression by India is clearly designed to silence the people of Jammu and Kashmir through sheer brutality bordering on genocide and ethnic cleansing. Presently every Kashmiri particularly the youth is adamant for their Kashmir to be part of Pakistan despite huge losses. Pakistan has always and will continue to support Kashmir freedom movement and every year 27th of October is marked as Black Day to give entire world a loud and clear message that Kashmiris will continue struggle for their right of self-determination despite Indian draconian laws and ruthlessness. Words of Abraham Lincoln, certainly is a reminder for India that: Those who deny freedom to others deserve it not for themselves; and under the rule of a just God, cannot long retain it.