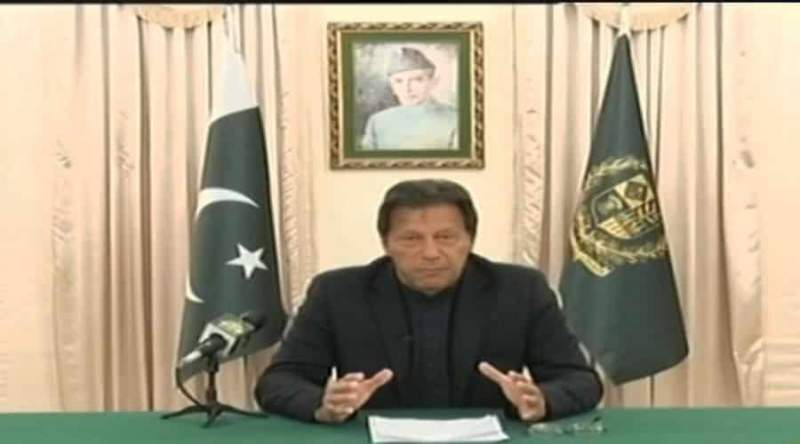 ISLAMABAD, 18 March 2020, TON: Prime Minister Imran Khan while addressing the nation discussed about the threats of Coronavius and its implications on the national economy, expressed his optimism that together, the government and the nation would win the fight against the pandemic.

The prime Minister advised the people not to panic from the situation. The country could not go for a complete lockdown due to the economic situation, which had seen vital signs of resurgence from the last year.

“The situation in Pakistan has been different. About 25 per cent of the country’s population is poor. The 2019 was a difficult year. Slowly and gradually, we arrested the economic situation, which showed signs of recovery. In case of lockdown, the people would be saved from the coronavirus, but could die from poverty,” he said referring to the lockdown of cities in Europe and the United States.

Dilating upon the negative impacts of the Coronavirus on the world economy, the prime minister warned that Pakistan had to endure its shocks due to slide in the prices of oil, aviation industry and transport.

He talked about  his fears that certain elements could try to push prices of the daily use items through artificial shortage and gave a stern warning to such elements that they would be strongly dealt in accordance with law.

Such elements in the past had created shortage of sugar and flour through hoarding, he added.

He said, “I give a clear message to these people that such situation will evoke strong reaction from the state that will move strictly against hoarders and profiteers trying to take undue benefits from the situation.”

The prime minister advised the nation to follow basic hygienic measures like frequently washing of hands and avoiding social gatherings, and said as Muslims they had firm belief in life and death, but they should also follow the teachings of Holy Prophet Muhammad (Peace Be Upon Him) about taking precautions in such situation.

“As a nation, we will face and Insha’Allah win this war,” he declared, and said under such scenario, they could also approach the International Monetary Funds (IMF).

The prime minister also assured doctors, nurses and other medical staff that the government would ensure provision of all the required health equipment to assist them in their Jihad against the virus.

He said the government was ready to take action to the situation after the outbreak of Coronavirus in China. On January 15, the government took decisions as the people were arriving Pakistan and they could carry the pathogen, he added.

He said the government was in constant contact with the Chinese and Iranian governments after the outbreak there.

The Pakistani Zaireen (pilgrims) were arriving at the border of Balochistan province, which was a deserted place where the provision of logistics was difficult, he said and appreciated the provincial government and the armed forces, who did well to handle the situation.

The prime minister referred to the government’s response, which, he said, was continuously following the situation.

“Our response started from January 15, as we had started screening of passengers at airports and so far about nine lakh were screened out,” he added.

On February 26, he said, the first coronavirus case was reported. Last week, the National Security Committee meeting was held after the cases surged to 20. They studied the world responses, like in Italy which was in complete lockdown whereas the United Kingdom had a different approach to the situation. The United States did not do anything at first, but now went for lockdown of its cities.

The National Coordination Committee was formed with the National Disaster Management Authority and all the chief ministers as its members. The economic committee was tasked to keep check on prices of food items, he added.

Expressing satisfaction at the availability of face masks, he said in severe cases, they could require ventilators and other equipment, and assured that arrangements in that regard were being made.

The prime minister said the core medical committee was continuously advising the government after reviewing the world scenario and the latest experiences.

President Dr Arif Alvi, he said, was visiting China recently and they would also learn a lot from the Chinese experience. China had almost overcome the outbreak, he added.

The prime minister said from the world experiences, they had fears over spread of virus in Pakistan, but expressed the confidence that they would overcome the situation.

He said the symptoms of the Coronavirus  resemblance to flu or cough like symptoms, but advised the people that every flu or cough was not related to the coronavirus.

The prime minister said the recovery from the Coronavirus was 97 per cent whereas in 90 per cent, the sufferers experienced mild symptoms.

He said the severe cases were hardly three to four p