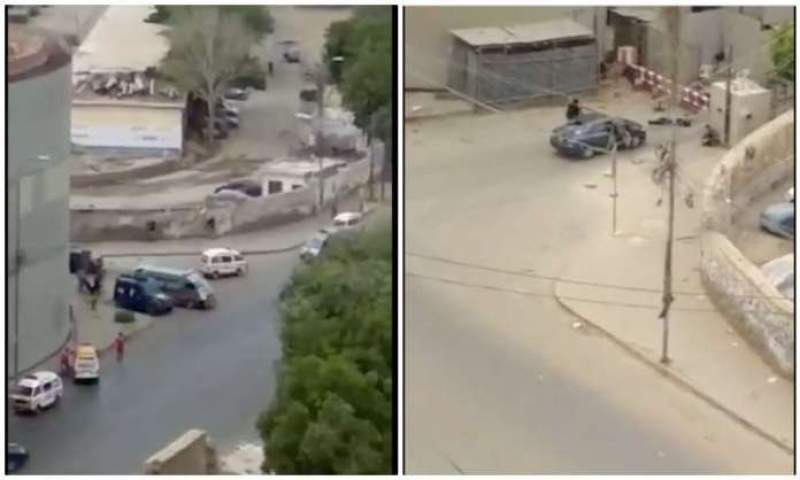 As per the details, unidentified persons driving silver Toyota Corolla Sedan 2013, bearing Karachi registration plate BAP 629, tried to enter the security barrier near Stock Exchange. When the guards stopped them, the unidentified gunmen got down from the car and opened fire on the guard killing one of them on the spot. Later there was exchange of fire in which another guard and a Policeman was martyred. Sindh Police Additional Inspector General Ghulam Nabi Memon confirmed that the firing took place outside the barrier gate. It was confirmed from eyewitnesses as well as Police authorities that the terrorists could not enter the Stock Market building. At least two terrorist were killed whose dead bodies were shown to the media. However, the security apparatus claimed to have killed four terrorists. Eyewitnesses claimed that they had brought some person in the car who was made hostage and wanted to recover some huge amount, however, their attempt failed. Another eyewitness claimed that there was internal rift between two groups within the Karachi Stock Exchange, having links in Mumbai Stock Exchange over some issue. The witness added that the group has gone underground after the incident as most of them migrated from Indian post 1980s and some of them do not possess valid Pakistani nationality.

A Counter-Terrorism Department official said that the attackers were carrying significant quantities of ammunition and grenades in backpacks. However, personnel, who were part of the Rapid Reaction claimed on the condition of anonymity that when they saw the bodies of neuteralized attackers, neither grenades, nor large quantity of arms and ammunition was there but later some placed different items including mobile phones beside the dead bodies, which was also displayed to media.

Meanwhile, the Indian media and Indian Military Intelligence run social media groups are carrying out extensive propaganda that Balochistan Liberation Army has accepted the responsibility of the attack. The names of Tasleem Baloch, Shehzad Baloch, Salman Hammal, Siraj Kungur are being publicized by the Indian intelligence agencies through their social networking. It has also come to light that India has established various call centers in Karachi and other cities of Pakistan, manned round the clock, where such propaganda articles, news items and video clips are regularly viralized.  New Delhi has shifted hundreds and thousands of illegal Indian with criminal background in Pakistan, especially Karachi who are also involved in terrorist activities. Such individuals are able to get Pakistani nationality by bribing NADRA employees and have been tasked to create unrest in Sindh and Balochistan by eliminating Baloch presence in Hyderabad, Sukkur, Karachi, especially Layari.