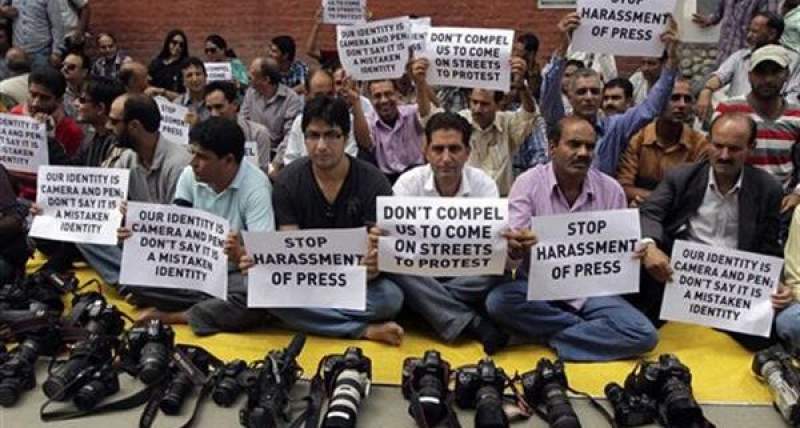 SRINAGAR, 7 July 2020, TON: The Kashmiri journalists throughout the Jammu and Kashmir announced on Tuesday a State vide protest for indefinite period against the highhandedness of bureaucrats from India as well as intelligence and security forces. They were protesting against New Delhi’s new media policy in Jammu and Kashmir State.  The journalists also assembled at the Press Enclave under the banner of “Jammu and Kashmir Media Guild” and were carrying banners that read: “Don’t gag media, we are an equally important pillar of democracy”, “Down with media policy 2020” and :We want freedom”.

President JK Media Guild Mir Ajaz Ahmad said “the intentions of the government clearly indicate an official gag to prevent us from reporting truth.” He said, “But we will not succumb to these pressure tactics. If this policy is not rolled back we will fight against it at every level and even stage protest in Delhi if need arises.” He said all the media forums and associations have exhibited solidarity to fight against this policy.

New Delhi has introduced a new Media Policy for the Jammu and Kashmir, “Media Policy-2020”. In the name of mechanism for monitoring of fake news, freedom of speech and thoughts has been curtailed to the lowest level. Journalists and news organizations have been made answerable to bureaucrats ruling the disputed State from New Delhi as well as intelligence and security officials, who have been empowered to decide which news item is fake or anti-national. All such newspapers and news organizations would suffer total blackout of sharing of official news and the advertisements. The Department of Information and Public Relations (DIPR) is acting as anti-terror squad using Unlawful Activities (Prevention) Act (UAPA) as the tool to harass the journalists.

Meanwhile, other journalists affiliated with various media associations and groups staged a joint protest against the New Media Policy-2020 and demanded its immediate rollback. Media persons in Kashmir have been reporting facts against all odds but after the introduction of new policy, they would be facing a very tough time. May journalists also said that they are being threatened that they may lose lives if noncooperation is witnessed.