Kashmiris weeping with blood in their tears 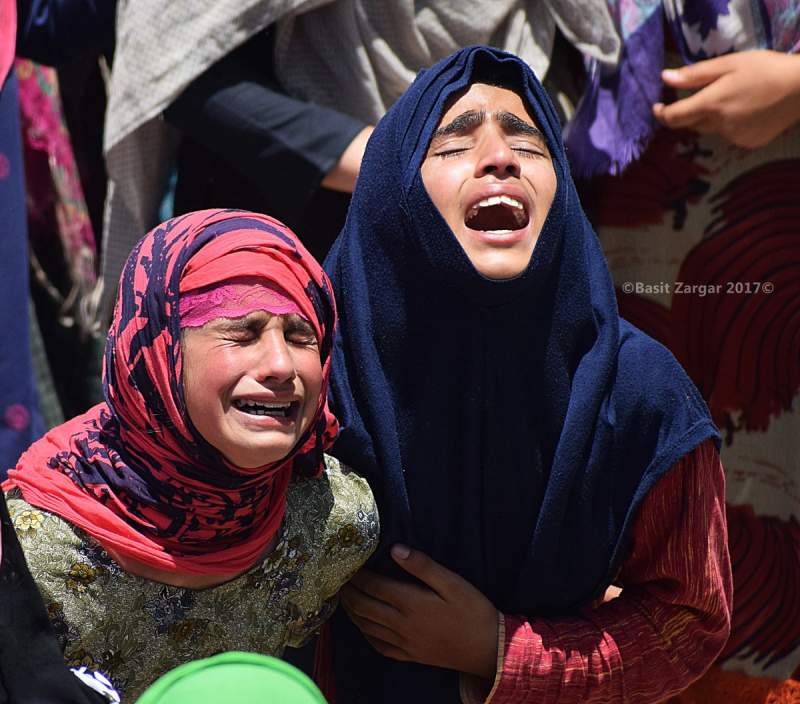 When it comes to the protection of and promotion of Human Rights in Indian occupied Jammu and Kashmir State, the Indian record as well as that of the administration of Jammu and Kashmir has had always remained very poor.  In a surprise move, month of July 2020 witnessed National Human Rights Commission (NHRC) trying to impose Standing Operating Principle in Indian Occupied Jammu and Kashmir State but seems too late with serious issue of action in good faith.  The first ever letter written by NHRC read, “In case of custodial deaths, the National Human Rights Commission (NHRC) should be intimated within 24 hours, and within 48 hours of the incident in case of an encounter death”. It is surprising that thousands of men, women and children have been killed in fake operations, extra-judicial killings and cold blooded murders, nowadays on the pretext of contracting Coronavirus but why all of the sudden the conscience of Indians NHRC awoke?

Interestingly, NHRC Secretary General Jaideep Govind has requested the Indian occupied authorities in Jammu and Kashmir to pass suitable instructions to those concerned for compliance and directed to immediately send all requisite reports, including the post-mortem, videography and magisterial enquiry reports, in all custodial deaths and encounter deaths. Meanwhile in an interesting move, Indian agencies aided a robust media attributed a letter from top Kashmir’s Pakistani leader Syed Ali Geelani, giving a call for a six day shutdown in entire Indian occupied Jammu and Kashmir  beginning 8 July 2020, on the occasion of death anniversary of Kashmiri freedom fighter Burhan Wani. Indian agencies blamed Kashmiri media for posting of social media platforms on Tuesday, 7 July and making it viral. It would surprise everyone that there is no internet service in entire Jammu and Kashmir except some pockets where the signals are too weak and specialized equipment is required to access the network. However, the India media claims that Jammu and Kashmir police was quick to step in, informing the people that it was a fake letter and that Police has filed a FIR under Section 13 of Unlawful Activities (Prevention) Act and Section   Indian Penal Code (IPC) for publishing or circulation of statements that cause fear and alarm in public.

It could not be comprehended that the Indian law enforcement authorities and other agencies did not directly clarified from Syed Ali Geelani about the genuineness of the letter but unidentified family member is being quoted that the letter is fake and not issued by Syed Ali Geelani. In a tweet dated 7  July 2020, Jammu and Kashmir police writes, “Kashmir Zone Police @KashmirPolice In this regard a #case FIR No 265/2020 under section 13 ULA(P) Act, 505/IPC has been #registered in PS #Budgam. Further #investigation is in progress. @JmuKmrPolice.” Another tweet said, As per the family sources of SAS Geelani the letter is fake and not issued by him. This is published from Pakistan. Police is taking action against those who are circulating it through different social media platforms to instigate violence and create L&O problems. @JmuKmrPolice.”

It is sad to observe that India has annexed illegally self-ruled disputed State of Jammu and Kashmir as Indian Union Territory against the signing of Instrument of Accession between Ruler of Jammu and Kashmir State dated 26 October 1947 as temporary provision, a number of United Nations Security Council Resolutions, Simla Agreement and other treaties concluded under the Charter of United Nations Organization. To add fuel to the fire in grave human rights violations, the Indian authorities have imposed draconian, Media Policy – 2020 on 2 June to further harass and punish the Kashmiris. Now Indian authorities would sensor all material on websites, pages of newspapers, portals and groups to check fake news or any material challenging the sovereignty and integrity of India so that journalist, editors and staff could be punished. The Indian media policy is challenging freedom of press and information and sheer violation of Charter of United Nations. One wonders why the United Nations Organization is silent and not doing anything for the right of self-determination of the Kashmiris who are still the symbol of colonialism.