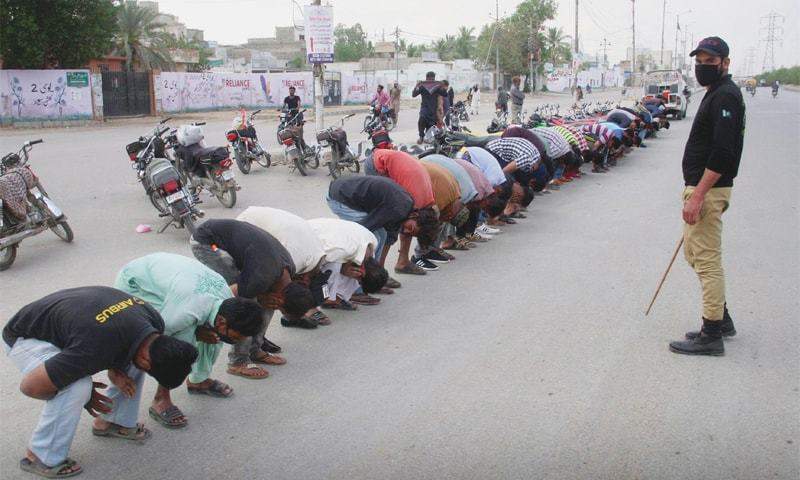 On the arrival of Muharram this year, an order was issued by Deputy Commissioner Mohammad Hamza Shafqaat which said, “There are sufficient grounds for proceedings under section 144 of the Code of Criminal Procedure (CrPC) 1898, to prohibit the use of motorcycles for pillion riding to avoid any threats to public peace and tranquility within the jurisdiction of Islamabad on 8th, 9th and 10th of Muharram. This was done to facilitate Mattami Jaloos and Processions as the authorities apprehended terrorist attack on Shia during Muharram. Accordingly, all roads were closed through long vehicles and containers and traffic was totally paralyzed in Rawalpindi and Islamabad as well as other cities while heavy contingent of law enforcement and police was deployed to allow all rituals complete unhindered.  For the successful execution, beside road closure by Traffic Police like Rawalpindi – Murree Hill station, all the internat / mobile service and transport was closed.

This year, on 12th Rabi-ul-Awal, Eid-e-Milad-un-Nabi, as the birthday as well as death anniversary of Prophet Muhammad Alhe Salam (Sal Allah Ho Alhe Wassalam) will be observed from 29 to 30 October 2020.  The same Deputy Commissioner, Islamabad, Muhammed Hamza Shafqaat, has issued a confusing order communicated through tweet, which has also been covered by all national and international media. The official tweet emitting from Twitter of Deputy Commissioner (DC) Islamabad says, DC Islamabad notified the public regarding the enactment of Section U/S 144 CrPc 1898 on the compulsory use of facemasks in public places, adding that anyone not adhering to the directive can be apprehended by the ICT Police.”

Business Recorder reported in its issue 29 October 2020, “Section 144 was imposed in Islamabad on Wednesday for ensuring strict compliance of standard operating procedures (SOPs) related to the Covid-19 among the general public and to stop further spread of the virus in the community. Following imposition of Section 144 in the city, wearing mask in public places has been made mandatory and anyone who is seen without a face mask will be prosecuted under Section 144 of the Criminal Procedure Code (CrPC). This order shall come into force with immediate effect and shall remain in force for a period of two months.”

The official news agency, Associated Press of Pakistan reports, “The district administration on Wednesday imposed Section 144 in the Federal Capital for a period of two months, making wearing face mask at public places mandatory to contain the spread of coronavirus (COVID-19). District Magistrate Hamza Shafqaat, in a notification, said the Section-144 had been enforced to ensure compliance of COVID-19 SOPs (Standard Operating Procedures) among the general public, following the advice of epidemiologists of DC COVID Nerve Center. Deputy Commissioner Islamabad Hamza Shafqaat said on his Twitter handle that anyone seen without a face mask would be arrested by the ICT Police. He also shared the notification along with his tweet.”

One wonders who is responsible for such orders for Muharram, Chelums, Eid Milad-un-Nabi, Shab-e-Baraat etc. Can Pakistani authorities in all cities and cantonments officially seal main and link roads with huge containers and trucks, jam mobile & internet services, cancel leaves of security forces and deploy them everywhere while prevent other religious occasions to take place? Why authorities ordered closer of Mosques and Madrassas and prevented congregational prayers in the name of COVID-19 this year but lifted all restrictions during Muharram and Chelums, however, ordered strict restrictions on all other occasions. It is high time that the authorities including Supreme Court of Pakistan take Suo Moto notice of the grave disparity and ensure that every Pakistani individually and collectively is treated equally with same yard stick.