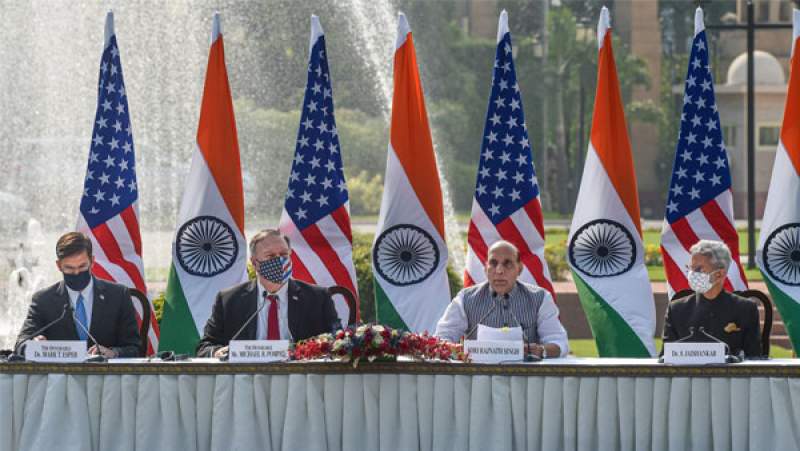 ISLAMABAD, 29 October, 2020, (TON): Responding to media queries regarding reference to Pakistan in the “Joint Statement” issued by India and the U.S. after their “2+2 Ministerial Dialogue” held in New Delhi on 27 October 2020, the Spokesperson said:

We reject the Pakistan-specific reference in the “Joint Statement”, issued by India and the U.S. after their “2+2 Ministerial Dialogue”, as unwarranted and misleading.

We take strong exception to Pakistan-related assertions made in the selective and one-sided Joint Statement, devoid of meeting the “objectivity criteria.” Failing to take cognizance of the grave humanitarian and human rights situation in the Indian Illegally Occupied Jammu & Kashmir (IIOJK), further aggravated by India’s unilateral and illegal measures of 5 August 2019, is tantamount to abdication of international responsibility.

Gratuitous and self-serving references in joint statements cannot mask the fact that it is India that continues to be the nerve centre of State-terrorism in the region including Indian Illegally Occupied Jammu & Kashmir, besides being a safe haven for the perpetrators of hate crimes against Muslims and Islamophobia.

By seeking to project itself as ‘victim’ of terrorism, India cannot divert attention from the gross human rights violations being perpetrated by Indian occupation forces and the resulting humanitarian crisis in IIOJK.

The international community recognizes Pakistan’s efforts, sacrifices and success in the fight against terrorism. As a country that has suffered the most from cross-border terrorism, Pakistan would continue to contribute constructively to regional and global efforts to promote peace and stability in the region.

It is important that partner countries take an objective view of the issues of peace and security in South Asia and refrain from endorsing positions that are one-sided and divorced from ground realities.