India is Planning Dangerous Game in Jammu and Kashmir 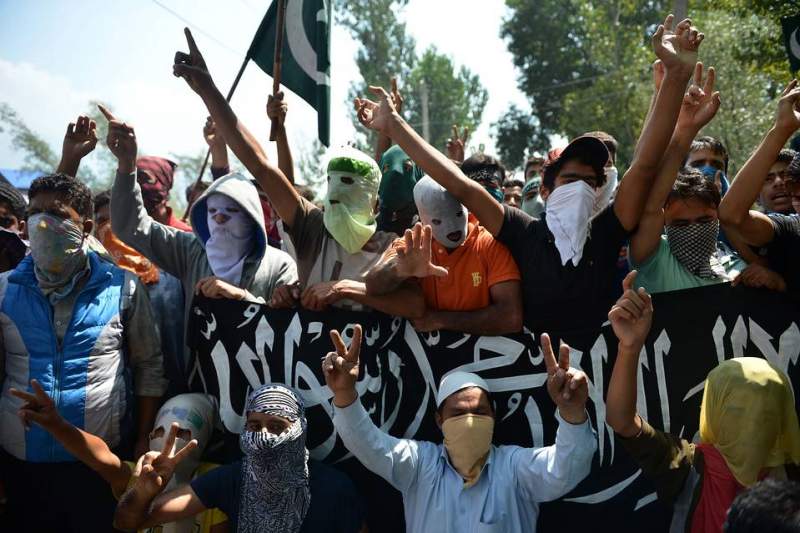 Lieutenant General Subrata Saha, Deputy Chief of Army Staff (Planning and Systems) who also served as General Officer Commanding 15 Corps, Srinagar, called on Governor N.N. Vohra in Jammu on 30 January 2017. He discussed with the governor about the strategy to shift freedom movement in Indian occupied Jammu and Kashmir from Islam to Azadi. If we recall,

Lieutenant General Saha while addressing a seminar on “Leveraging Defence Expenditure as a Tool for Nation Building”, organized by the College of Defence Management had said that the discourse in Jammu and Kashmir is shifting to primacy of Islam over Azadi adding to complexities in dealing with sectarian faultlines in the border state. In another seminar organized by Art of Living Organization, “Kashmir back to paradise – its importance cannot be overstated anymore”, Lieutenant General Saha said, there is a need to think out of box and new way out for ensuring return of normalcy and prosperity to Kashmir.

It is interesting to note that the International law and the declarations of the United Nations on self determination has given the Kashmiris of disputed Jammu and Kashmir state the right to struggle for their freedom. Ironically, every year, the UN General Assembly unanimously adopts the resolution, which reaffirms the right of all people’s to self-determination and calls on the states concerned to immediately end their occupation and all acts of repression but despite passage of 69 years, Kashmiris are being victimized for no fault of theirs. So far, UN has not constituted a fact finding mission to investigate brutalities perpetrated by the Indian occupying forces. The state of affairs in occupied Jammu and Kashmir has reached to a stage where locals have come to an open revolt against the Indian security forces. For decades local villagers in Jammu and Kashmir, who use to lock their door and disappeared on sighting Indian troops, have changed their strategy and for the first time are raising up at the sight of Indian troops entering their villages by throwing stones and bricks along with abuses, forcing the troops to flee.

Ever since, Prime Minister of Pakistan Nawaz Sharif speech at United Nations Security Council (UNSC) on 22 September 2016, in which he complaint against India’s unacceptable preconditions to engage in a dialogue and pointed out that talks are in the interest of both countries to resolve differences to avert the danger of any escalation, Indians have chalked out new strategy for Jammu and Kashmir state. Prime Minister Nawaz Sharif had highlighted at UNSC about Burhan Wani’s emergence as the symbol of the Kashmiri popular and peaceful freedom indigenous uprising movement, led by Kashmiris, young and old, men and women and Burhan Wani’s brutal killing at the hands of Indian security forces. Interestingly, Prime Minister Nawaz Sharif also shared with the UN Secretary General a dossier containing detailed information and evidence of the gross and systematic violations of human rights committed by Indian forces in occupied Jammu and Kashmir but no action has yet been taken.

Since the cold blooded murder of Burhan Wani on 8th July, over 151 Kashmiris including children and infants have been martyred. Over the period of six month, as a result of pellet firing by Indian security forces, over seven thousand unarmed civilians have been injured.

In the recent development, at least six Kashmiri villagers were injured after the Indian troops resorted to firing to disperse protesters in Samboora village in Pulwama district on 31 January 2017. DIG South Kashmir S P Pani disclosed that a search operation was launched by 50 Rashtriya Rifles in the village but Kashmiris started stone-pelting and greeted them with abuses, therefore the troops opened live fire on protesters, injuring protesters. With the appointment of Punjab born South Carolina Governor Ms Nikki Haley as new American Ambassador to the United Nations, New Delhi is seeing her as a trump card in the resolution of Jammu and Kashmir issue. However, owing to her links with Sikh family of Amritsar, Punjab, she is equally close to Pakistan. She was 12 years old when Operation Blue Star was carried out by Indian military against Sikh separatists in 1984. One feels pretty optimistic that Ms Nikki Haley, under the leadership of President Donald Trump would resolve the Kashmir dispute between India and Pakistan on the basis of already passed UN Security Council Resolutions, to assure peace and prosperity in the region.