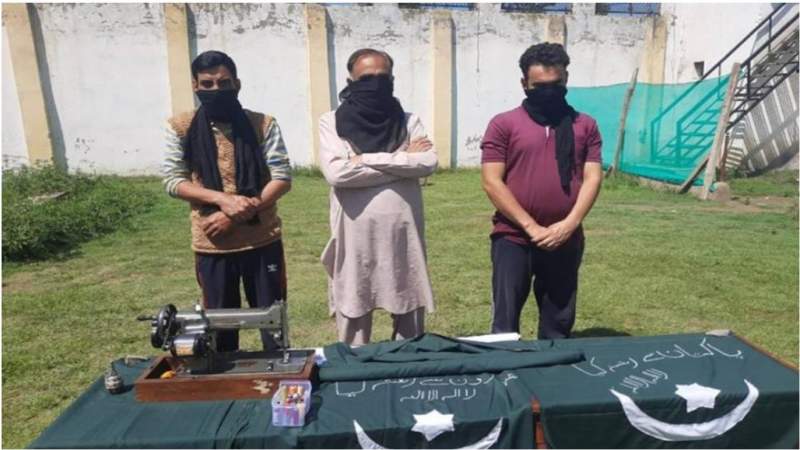 An FIR vide no 35/2020 has been filed in Police Station Hajin against, Mujeeb Shamas, Tanveer Ahmad Mir and Imtiyaz Ahmad Sheikh all residents of Mir Mohalla Hajin in which their arrests have been shown and FIA read, “On 06/09/2020 police station Hajin recieved information from reliable sources that some miscreants at the behest of local active militants of LeT has hoisted Pakistani flags at main Bazar Hajin with a view to create fear pyschosis and  incite anti-national feelings among the common people of Hajin town.” Police also claimed that a hand grenade, cloth, sewing machine and other incriminating material used in preparing flags was also recovered from them.

A local eye witness at main Bazar Hajin said on the condition of anonymity, “I swear by Allah that Indian Military Intelligence and other Intelligence setups of security forces are, in fact, involved in the crime but they always blame the local Kashmiris”. He pointed out that the six side star in the flag is symbol of Jews and why a Kashmiri will stitch such flags or hoist in the Bazar. TON representation at Srinagar also confirmed the claim of eyewitness at main Bazar Hajin through sources.

It has become a matter of routine that Indian authorities create self engineered cases of involvement of Kashmiri Muslims in various crimes and terrorism related cases and try to establish their link with Pakistan to malign the neighbouring country. How long Kashmiris would suffer.