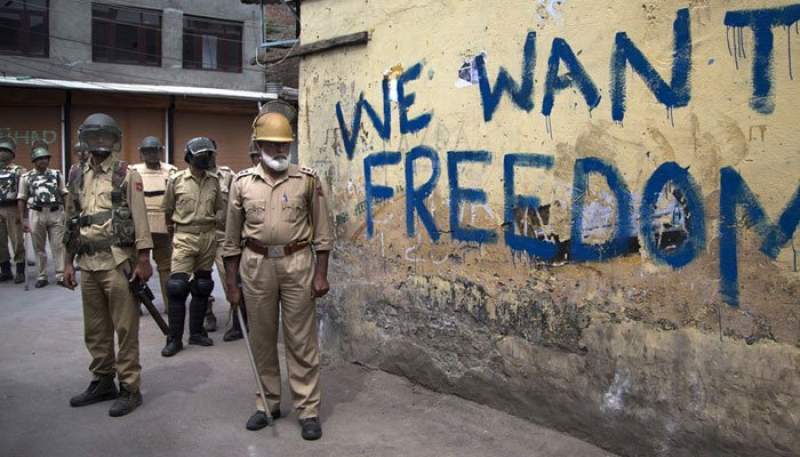 Partition of subcontinent is hopscotch of blunders. On this day, the 27th of October1947, people of Kashmir were denied their right of self-determination. After the independence of Pakistan and India it was assumed that Jammu and Kashmir, as an adjoining state with majority Muslim population will accede to Pakistan but inverse happened. The Maharaja Hari Singh, Hindu ruler of Kashmir acceded to India through inappropriate and illegal instrument of accession, which was stage-managed by India. India deployed its armed forces in Srinagar and occupied the valley whereas “Indo-Pak Partition” allowed Kashmir to decide their own fate but to date; the right of self-determination has not been extended to them.

Since day one people of Kashmir resisted against Indian forces and rejected their illegitimate occupation. On 1st January, 1948, India took Kashmir issue to United Nations Security Council, consecutive resolutions passed and UNSC invalidated Indian invasion in Kashmir. UN approved a ceasefire, demilitarization of the State and unbiased plebiscite to be conducted under the supervision of the world body. In the years ahead, India thwarted all the UNSC’s efforts to hold the plebiscite on one pretext or the other, as India knew that if an impartial plebiscite was held, Muslim majority population of Jammu and Kashmir will vote for accession to Pakistan.

India is playing old game with new tactics. The outbreak of COVID-19 has brought the world to a standstill but India is taking advantage of COVID-19 pandemic. India is constantly massacring Kashmiris in Indian Occupied Jammu and Kashmir (IOJK) and is beating around the bush. Extra Judicial killing, rape, mass arrest, firing of tear gas shells, disappearances, pellet gun shootings, all other methods of torturing people of Kashmir have become obsolete. There was a shift in demography of the region when India forcibly annexed Kashmir as thousands of Hindus gets residency, jobs and land. Now Indian troops kill Kashmiris saying they have COVID and use corona as a weapon to change region’s Muslim majority status to settle Hindus in the region.

India has been indulged in killing the people of IOJK with indemnity ever since their launch of freedom fight. From the start of corona virus pandemic Indian forces are martyring Kasmiris and are refusing to hand over dead bodies to their relatives. Indian Security forces are burying these martyrs secretly in army-managed graveyards saying they are infected by corona virus because they have a fear that if they will hand over dead bodies, mass protests will be started in the region. India is committing grave breach of human rights and international laws but the world is numb. Continued communications restrictions and no access to medical and other necessary supplies are making the Covid-19 situation worse for the Kashmiris in IOJK. Indian authorities turned Kashmir into “Ghost Town”.

Regardless of the massive suppression of the Indian forces to silence and subdue Kashmiris, the Kashmiris have been fighting for self-determination for hundreds of years. The real face of Kashmir Freedom fight is Burhan Wani, who gathered militants to promote freedom struggle against illegal Indian rule in IOJK. Another name Maqbool Bhat, the founder of Kashmir Liberation front, promoted armed struggle for Kashmir freedom. He was hanged to death by Indian state. Up till now, India is suppressing Kashmir freedom fight through every possible way. The Human Rights violations and genocide in the Kashmir valley with full impunity under the protection of “draconian laws” like Armed Forces Special Powers Act (AFSPA) and Public Safety Act (PSA) by Indian security forces grows every passing day.

Unfortunately despite driving attention of world community to Kashmir issue, everyone kept a mystifying silence. The gross massacre of Kashmiris continues from ages. United Nations Organization, Eurpeon Union, Human Right organizations even Islamic countries and their organizations have just become spectators and are showing stiffness to the issue. UN seems to be helpless in having myriad of its resolutions implemented.

Since the day of partition, India and Pakistan fought wars in 1948, 1965 and 1971, two of them were on Kashmir but the issue has only grown more chaotic. The split state of Kashmir has been morphed into a Gordian knot, with its ends tied with both India and Pakistan. This Gordian knot cannot be untied unless and until both nations pull on each end. Today Kashmir has a long dreary past that is filled with missed opportunities. In the present day the geopolitical position of Kashmir has made it a nuclear flashpoint in South Asia. Only time has the answer that will Kashmiris ever get their right to self-determination?

No matter what, years of struggle and sloganeering have made this sure that Kashmir is the jugular vein of Pakistan. Every year 27th of October is observed as Black Day to give loud and clear message to the whole world that Kashmiris will continue to fight for their right despite Indian’s brutality and Draconian Laws. This day highlights the 72 years of struggle of Kashmiris and their hunt for freedom.

Featuring usual suspects of Kashmir cause, public holidays, occasional talk shows, highlighting the ‘plight of Kashmiri brothers’ kept it alive but these acts work no more… now it is the need of the hour that Pakistan legally fights for its jugular vein Kashmir with logic based on facts from history and expose India’s illegal occupation.